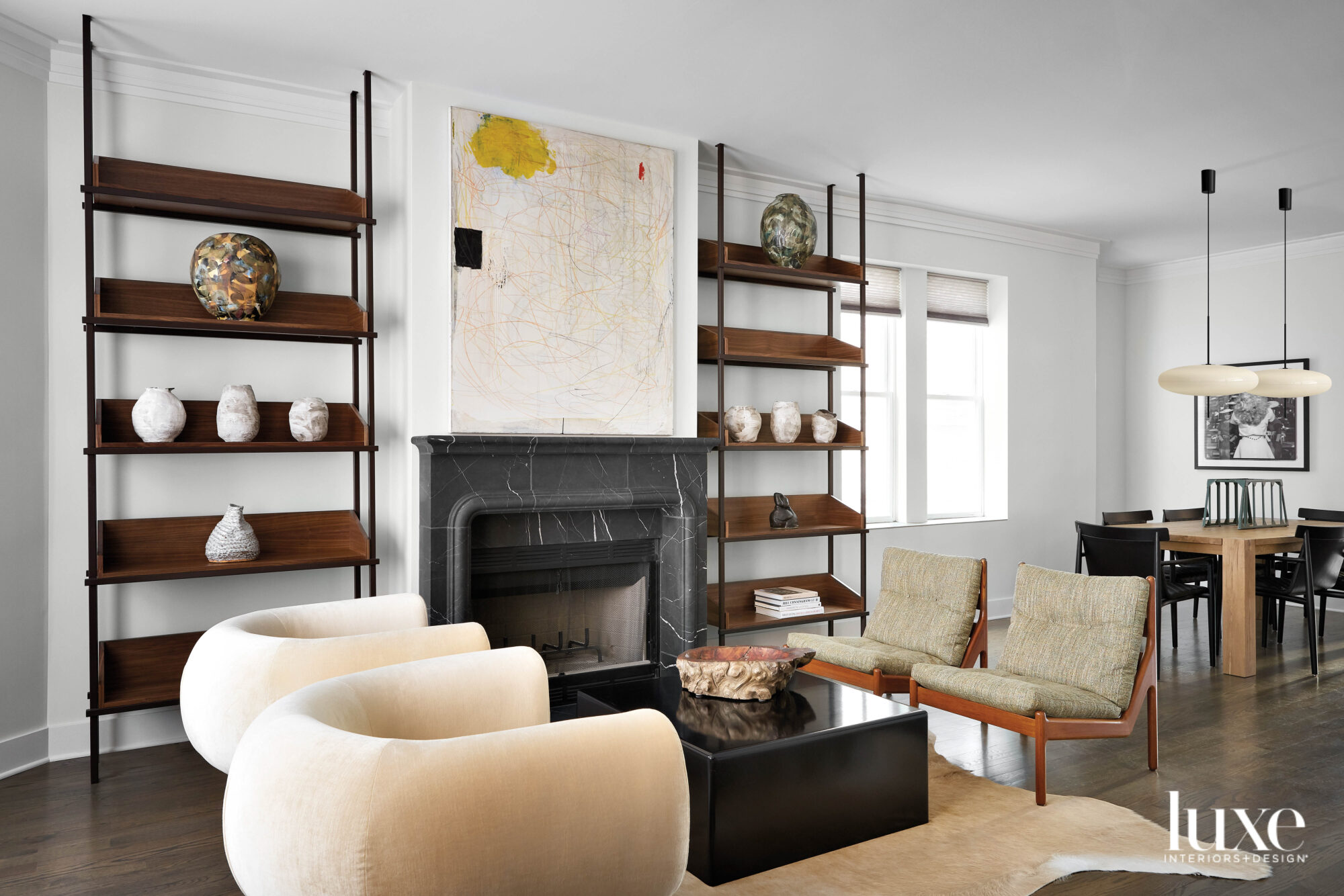 The post When A Chicago Designer Is Inspired By His Stylish Client, Unforgettable Design Emerges appeared first on Luxe Interiors + Design.

It’s a style that his client developed as she built a career that sent her all over the world. Now, however, she was ready to focus not on jet setting, but on creating her dream home. Melott, with his distinct brand of eclectic chic, was just the man to help her conceive that home from scratch. “We’re accustomed to blank canvases,” says the designer. “We enjoy creating a curated story.”

A first matter of business was re-instilling character in the historic dwelling. Originally a single-family residence, the structure had at one point been converted to individual apartments, and later, back to a single-family home with basic finishes. Over these iterations, anything original had been replaced with drywall. For the designer, who describes himself as “not a restoration-guy” and instead “a nod-to-history-guy,” the idea was to bring in an air of patina, as opposed to recreating the home’s provenance as it were. “People don’t necessarily wear vintage clothing, but they’ll wear something emblematic,” he says. Led by this approach, Melott embarked on a renovation alongside general contractor Steve Gonczi.

As a starting point, layers were added to the home’s simple moldings as “a forward-looking take on ornate,” Melott says. To distinguish the foyer, he replaced standard-issue doors with antique wooden pocket doors found in New Orleans and swathed the walls in a rich coat of chocolate brown to strike a traditional chord. Envisioning the original turn-of-the-century layout prompted such additions as the custom-molded honed Nero Marquina marble fireplace surround and airy takes on classical built-in bookshelves, which Melott designed with local fabricator Joel Fisher of Lazuli Studios.

A radical character transformation took place with the high-octane kitchen, which was inspired by the client’s fashion sense. Taking cues from her closet, Melott replaced the existing white Shaker-style cupboards with a glossy black design, which opens onto equally swank living spaces. At the adjacent dining table, chairs with leather stitching pay homage to the client’s love of Chanel, while subtler sartorial strokes continue in the nearby drinks area. There, the sinuous shapes of two creamy velvet club chairs play to the feminine curves of the new fireplace.

As a self-made executive who grew up in a family of tradesmen and tradeswomen, another high priority for the client was championing local talents. “The idea of having things made by passionate, local hands felt right for my home,” she explains. “There’s the piece of supporting families in the community, but there’s also the matter of sustainability and doing right by the environment.” Melott responded enthusiastically, hitting the town for vintage pieces, peppering in contemporary furnishings and lighting, and finalizing the details with a chorus of local ceramicists, painters and makers. “Ninety-nice percent of the art in this home is local,” he confirms.

As with all great design, here, aspiration merges with function, pretty with practical.Upholstery fabrics chosen for their high durability score and a lack of rugs throughout cater to the client’s two cats, while amenities like personalized lighting solutions and discreet charging ports make working from the home’s many comfortable perches a breeze, especially in the COVID-19 landscape.

“Everything we do is a reflection of the people we do it for,” Melott says—a philosophy carried through from initial sit-down to final flourish. Case in point: Over one margarita-fueled meeting, the client shared that her grandmother—who had 10 children and never finished high school—avidly read National Geographic. When she walked into her newly designed home, the client found a tidy stack of antique issues sourced from near and far. “He brought me gorgeous, high design, but somehow, he brought my roots to me, too,” the client shares. At the walk-though, she adds, “I felt like I was walking into my house, my parents’ house, my grandparents’ house. It was the most unbelievable feeling of coming home.”

The post When A Chicago Designer Is Inspired By His Stylish Client, Unforgettable Design Emerges appeared first on Luxe Interiors + Design.