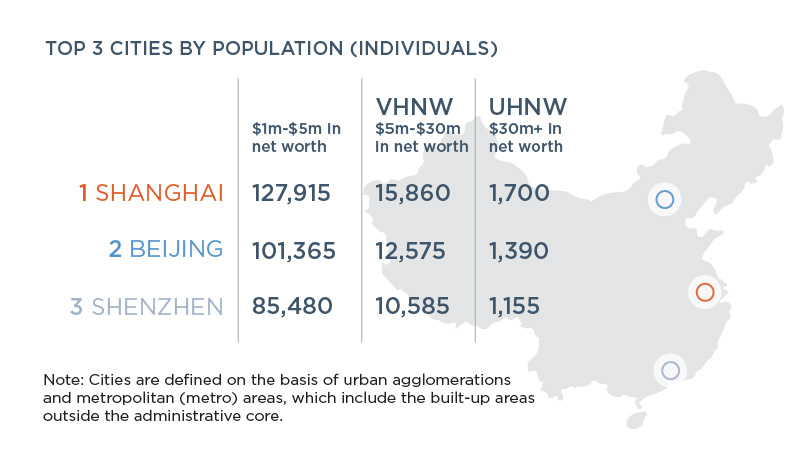 During 2019 Wealth-X completed a significant expansion to its dataset on the wealthy in China. We identified nearly 270,000 wealthy Chinese individuals, growing our total dataset by more than 22% and expanding our coverage in China nearly 18-fold.

The Wealth-X Analytics team is able to complement our flagship reports with a more detailed look at wealth in individual countries around the world. We began our country-specific wealth series earlier in this year with a look at the wealthy in Germany. From this significant data expansion, we are now taking a closer look at the wealthy in China, the world’s second largest wealth market behind the United States.

Via unprecedented wealth growth in recent years, China has overtaken Japan to emerge as the second largest wealth market.  The wealthy in China represent an estimated 2 million high net worth (HNW) and almost 27,000 ultra high net worth (UHNW) individuals in 2019 – though the market remains substantially smaller than the US.

Demonstrating their vast wealth, at a total of $4.2trn, the ultra wealthy in China maintain a significantly higher combined wealth than the 2 million individuals at the ‘lowest’ wealth tier.

METHODOLOGY FOR ‘THE WEALTHY IN CHINA’

Wealth-X proprietary data assets empower our clients with both a top-down and on-the-ground understanding of the wealthy.

To size and forecast the wealthy population and its combined wealth, Wealth-X Analytics leverages our Wealth and Investable Assets Model. This model produces statistically significant estimates for total private wealth and estimates the size of the population by level of wealth and investable assets for the world, for each of the top 75 economies, and for over 100 of the world’s major cities.

To profile the characteristics of the wealthy, we use our unique and proprietary Wealth-X Database, the world’s largest collection of records on wealthy individuals from around the globe. Each Wealth-X Dossier provides insights into an individual’s financial profile, career history, known associates, affiliations, family background, education, philanthropic endeavors, passions, hobbies, interests and much more.

Wealth-X partners with prestige brands across the financial services, luxury, not-for-profit, and higher-education sectors to fuel strategic decision-making in sales, marketing and compliance.