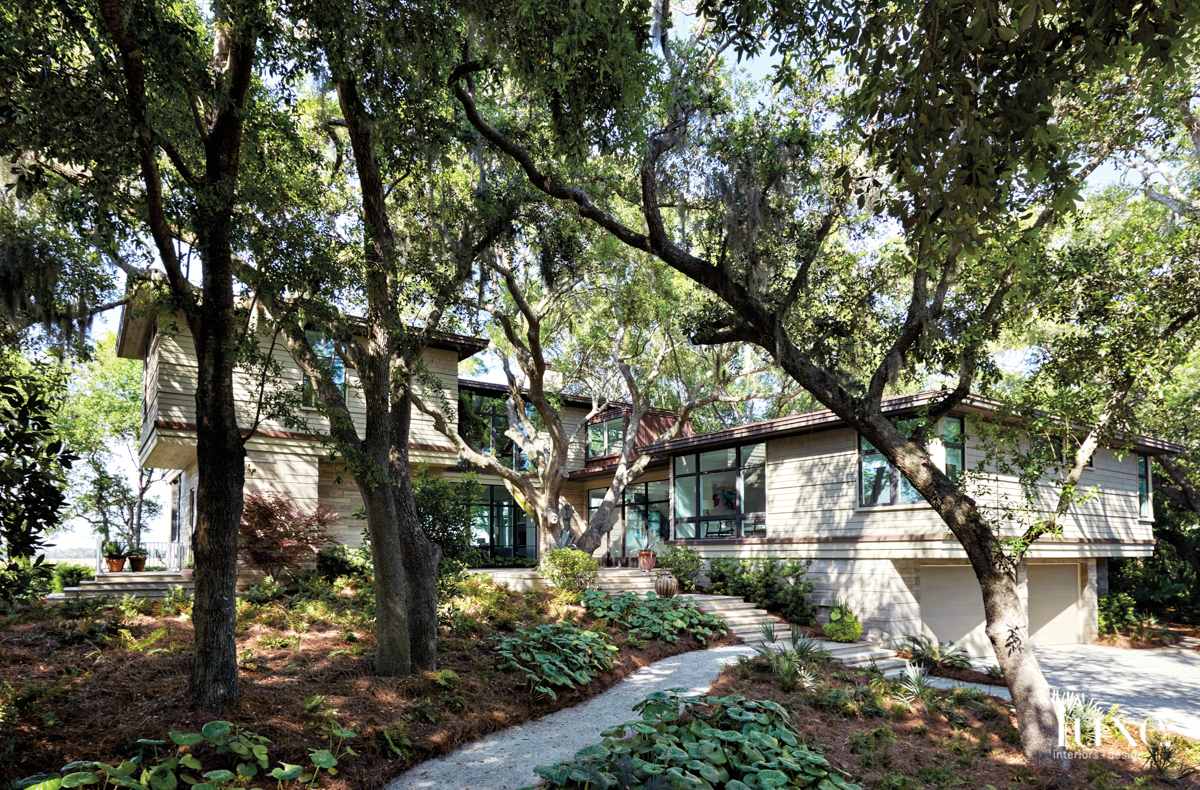 Full of natural beauty and altered little over time, Kiawah Island is a treasure of the South Carolina Lowcountry. Situated about 25 miles from Charleston, the barrier island has changed hands frequently over the centuries—from a reputed pirate and English colonists to a conservation-minded development company. What persists is an astounding natural habitat for white-tailed deer, bobcats, great blue herons and, yes, beachgoers and golfers.

Kiawah Island’s sense of community and evident natural wonders proved appealing to Atlantans Carey and Doug Benham, who credit the idyllic setting with their decision to build a vacation home there. “We thought the location was just beautiful, among the ocean and the marsh,” explains Carey. “It was such a gorgeous blend of everything.”

Envisioning a modernist, multilevel house that would respect Kiawah Island’s landscape, the Benhams engaged Atlanta-based architect Keith Summerour, with whom they’d worked in the past, to design it. Having established his reputation as a classicist, Summerour has in recent years expanded into contemporary design; what has not changed is his conviction that architecture must be rooted in the land. “Contemporary architecture is the expression of a strong idea, but I do feel strongly that it needs to be of the locale,” says Summerour, whose starting point for the Benhams’ home was a hallmark of the coastal South: the live oak tree.

For the uninitiated, live oaks have undisciplined limb structures, their Spanish moss-draped appendages hovering close to the ground and reaching upward toward the sky. To accommodate the live oaks on the Benhams’ property, Summerour configured the residence as three connecting pods nestled among the trees, laid out to surround one particularly majestic specimen. He managed to negotiate branches by crowning the house with an undulating roofline. The effect is, as Summerour sums up, “as if you took the Swiss Family Robinson tree house and moved it to the ground.”

The neighboring marsh inspired the home’s exterior finishes, as well. “When you look at the marsh, it appears as hundreds of horizontal lines—because of the grass and small tributaries that run throughout it,” notes Summerour, who mimicked this effect with board-formed concrete for the first floor, creating the impression of weathered wooden planks. Mixed with local sand and seashells, the material has the benefit of capturing “the general feel and coloring of the marsh.”

To the second story, Summerour applied two layers of wooden shingles to amplify their shadow lines, once again echoing the marsh’s striated appearance. Instrumental in the process was general contractor Mike Leonard, whose attention to detail ensured the home’s finishes would blend seamlessly with its environment. To contrast the wealth of organic surfaces, Summerour placed massive panes of glass that soar up the façade, wrapping corners and running across walls, affording panoramic views of the landscape.

The grounds surrounding the house reflect the combined efforts of landscape architect John Tarkany and landscape designer Kelly Megeath of Garden Elegance, who likewise took their cues from the marsh, incorporating indigenous grasses and native plants like dwarf palmetto and yaupon holly, along with a few non-native species; Japanese plum yew, for example, was trimmed into neat hedges to complement the home’s clean-lined architecture.

The interiors were just as creatively conceived, but here, both nature and art drove many design decisions. As a visual artist and former board member of Atlanta’s High Museum of Art, Carey and her husband had spent years collecting works by important artists such as Sally Michel Avery, Stephen Pace and Ivon Hitchens, even earmarking specific paintings for each room of their Kiawah Island retreat. Recognizing the deftness required to design it, Carey was quick to call up a friend, Atlanta designer Beth Webb, to help realize her vision. “I knew Beth had the experience, style, taste and personality that would allow me to consult her expertise,” says Carey. “I had a lot of fun buying pieces on my own, but I always came back to Beth for her opinion.”

Webb’s background as an art dealer ensured she was up to the challenge of tailoring the Benhams’ furnishings to their artworks. “Creatively, I like to be stretched, so I love it when someone says, ‘Let’s do something different,’ ” she enthuses. Carey requested that the palette of each room stem from the art as well as the marsh landscape, so Webb pulled hues directly from paintings, sourcing textiles in corresponding shades. Plush selections of upholstery prove that the designer considered comfort just as much as color. “I think contemporary style is cool and chic,” she notes. “But you need to be able to live in it.” To that end, a curated a mix of custom-made and midcentury furnishings keep the effect dynamic.

Ever the editor, Webb shunned any decorative objects that did not hold meaning. “There is little here that does not tell a story,” the designer notes. Truth be told, it’s a statement that could be applied to every aspect of the house and the surrounding property. And as for the homeowners, their story also has a happy ending. “We wake up surrounded by glass walls, looking out onto this huge, incredible, ever-changing marsh,” Carey expresses. “Isn’t that wonderful?”