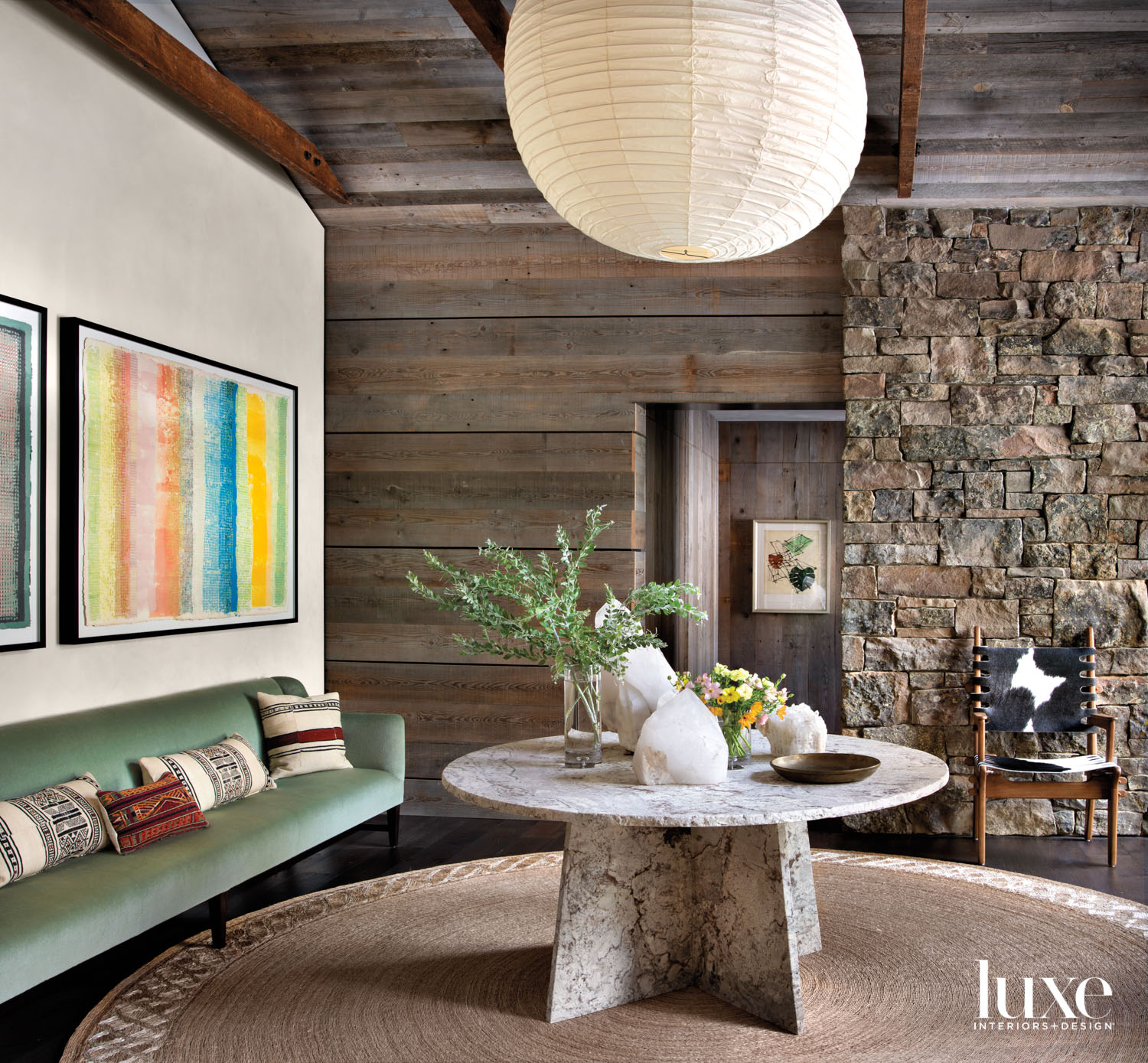 The post The Montana Lake House That Celebrates Nature With A Bit Of Fun appeared first on Luxe Interiors + Design.

<![CDATA[ <p class="p1"]]&gt;The words, “I want to have a little fun with this house,” are music to a designer’s ears. And that’s exactly what Peter Dunham’s client said upon hiring him to craft the interiors of the Whitefish, Montana, vacation home she shares with her husband. To Dunham, “fun” meant playing to the expansive lake views from the residence’s hillside location. It also meant going a bit wild, blending elements from the 1950s, ’60s and ’70s, and layering with art and handmade pieces. “I’ve never done this particular look for another client in this environment and context,” he says. “It’s very much tailored to their style and the locale.”</p>

The clients emphasized the importance of respecting the surrounding environment. To speak to the local vernacular, Dunham recommended residential designer Larry Pearson. He was familiar with Pearson’s work and confident that he could create the contemporary but relaxed vibe the couple was looking for yet stay true to the setting. “We love regional materials,” notes Pearson, who worked with general contractor Kelcey Bingham to incorporate recycled timber and Montana moss rock. “The exterior color scheme and materials blend into the setting,” adds Bingham. A sense of place was top of mind for landscape architect Kurt Vomfell as well. “The goal was to reflect the character of Montana,” says Vomfell. He points to the native and near-native plantings he used that “feel like they were found in a meadow here.”

While the team wanted the residence to fit in, they also wanted it to be aesthetically interesting. So, Pearson flipped the script on a classic lake house. A guest house was erected at the top of the hill, with the main house set below. The entry from the motor court leads to a foyer from which a stone staircase descends into the social spaces at lake level. “This is a home that touches the water,” Pearson says. “So, you’re engaging with the lake.”

A contemporary style was important, but, Pearson asserts, an ultra-sleek modern home was never his goal. It was important, he says, “that you can take your shoes off, walk down to the beach, jump in a boat and come back in soaking wet.” Adds Dunham: “It was much more about organic modernism. Larry was very invested in how his design was working between these materials. You’ve got really beautiful stonework, woodwork, hand-troweled plasterwork and iron elements that he brought in.”

Since the clients didn’t want what Dunham calls “a serious, monochromatic house,” he incorporated color but carefully considered its usage. “The outside view is stunning with the shades of blue and gray-blue. When the lake goes bright, it’s green,” he says. “You’ve got the green of the trees and the colors of the mountains. So those are what you want to celebrate.” The designer worked in verdant tones through furnishings such as teal pendants in the kitchen, a sea-green sofa in the foyer and light green swivel chairs in the living room. Varying shades of sand that nod to the beach set the backdrop.

When Dunham did choose to use other colors—mixing in burnt-orange and saffron-yellow dining chairs among the blue and green ones; designing a sectional upholstered in a pumpkin-colored chenille for the sitting room—he kept them muted rather than bright and intended for them to support the vibrant art. “A lot of the art is quite fresh,” Dunham says. “You didn’t want to put up works that felt sludgy.”

To this end, he hung a vintage tapestry prominently in the dining room. Its black background and bold colors contribute an eye-catching graphic quality and a bit of drama, while the textile itself mutes noise and adds softness against the stone walls and steel-framed windows. The result: A room where dinners last for hours, thanks also to the generously scaled chairs covered in a stain-proof leather that is “semi-indestructible,” says Dunham.

This isn’t the only room for gatherings. The entire house is designed for groups. There’s the cozy nook in the living area warmed by a fireplace—the perfect spot for card games—the inviting orange sectional and the many seating areas out on the deck. Which is precisely the point, Dunham muses. “I look back, and I see the picture over the lake or the chairs around the fire pit and think, ‘that’s somewhere I’d like to be.’ ”

The post The Montana Lake House That Celebrates Nature With A Bit Of Fun appeared first on Luxe Interiors + Design.