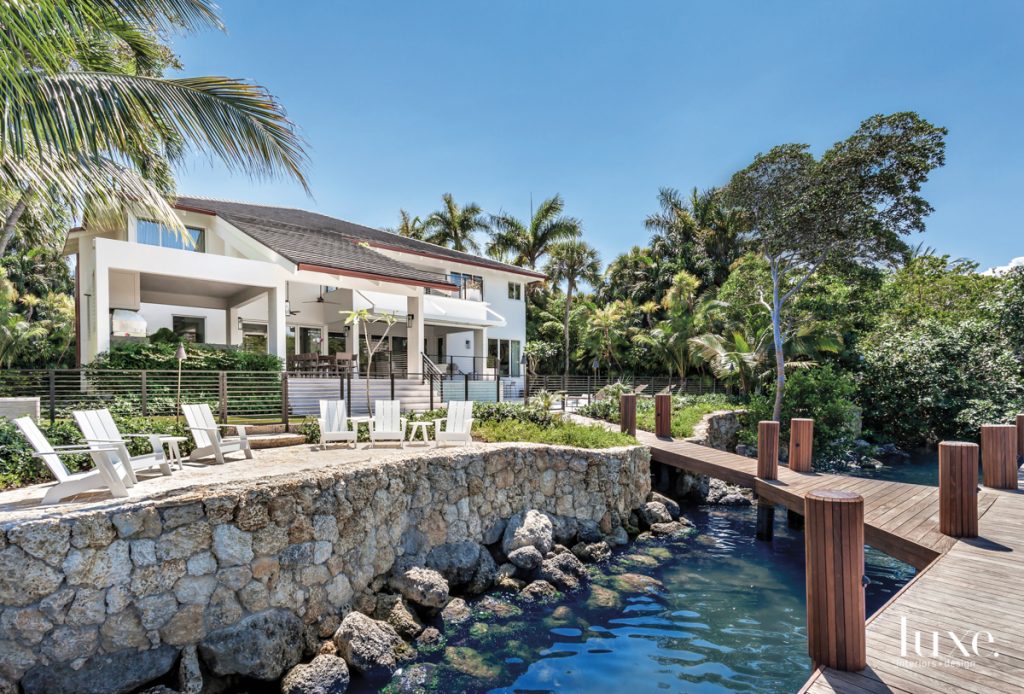 Like a good conversation, a space ideally suited for entertaining should encourage free-flowing, organic interaction. Designer Carolyn McCarthy realized early on that her clients’ Coral Gables residence lacked that key element. Partitioned by too many walls, the abode’s gathering areas were siloed. And despite a prime Coral Gables Waterway location, the home didn’t take full advantage of its picturesque setting. On top of all that, the original design was planted firmly in the 1980s.

What began as a small project evolved into a two-year, top-to-bottom renovation for McCarthy, architect Ryan Alderman, general contractor Jordan Gruber and builder Jason Elmer. Having collaborated with the owners previously, the designer knew how important the social spaces would be. “I had spent the past two years prior working on their children’s houses, so I had a good sense of how they entertained,” she says. “Every weekend, they host probably 20 people for dinner.”

Restructuring the clients’ home to fit their lifestyle meant removing several confining walls and doors as well as liberating obstructed vistas. Gruber and Elmer replaced a dining room wall with glass-enclosed wine storage and substituted the staircase’s thick wood balustrade for stainless steel and glass, facilitating views to the outdoors even from the kitchen. They also knocked down the wall between the family and living areas, creating one expansive space, and removed the latter’s 10-foot-high, 15-foot-long cherry built-in in favor of a fireplace of book-matched marble. “I felt like I needed a strong focal point when you walked in,” McCarthy explains.

Among the most striking aspects of the redesign, the home’s foyer originally featured a sizable dark wood door prefaced by a long porch. Gruber and Elmer brought the entry forward, doubling the dimensions of the foyer, and installed a 12-foot glass pivot front door to capitalize on the natural light. Yet that’s not the greatest expanse of glass they added to the home. The living area’s glass doors span an entire wall’s length, open wide and stack unobtrusively to encourage indoor-outdoor living. Even better? The idyllic waterfront landscape can now be seen from the foyer.

For a family who lives to entertain–and lives in a balmy tropical climate–outdoor space is the holy grail. In the backyard, to enlarge the upper terrace, the team filled in a set of steps that had led to the pool; a barbecue pavilion was added as well. Among the grounds, landscape designer John Farrar complemented the water view with beach creeper, Lignum vitae trees and a grove of Satakentia liukiuensis palms. “We really tried to make sure all the plant material was pretty mature and at a good height so, even from their second-floor windows, the owners had almost fairly immediate privacy,” he says.

In addition to fashioning spaces geared to hosting guests, McCarthy had to take another critical component into account for the redesign: the owners’ ample collection of artworks by Cuban masters. She initially considered hanging the paintings salon-style in the upstairs family room until an art-hanging consultant made a salient point. “He looked at me and asked, ‘Have you ever seen a Monet hanging above a Monet?’ And I said, ‘Point taken,’ ” she laughs. “Because they are different artists and are probably all of equal reputation, we worked on balancing size and scale as well as framing. We reframed only a few pieces, because they were so beautiful on their own.”

Just as imperative was the way each work of art was illuminated. “One of the first things we did with the owners was pinpoint locations for pieces,” Elmer recalls. For certain major walls, he and Gruber installed recessed track lighting with adjustable heads that can be moved and changed depending on the artwork. “A lot of collectors like to cycle through their paintings throughout the years of living in their homes,” Gruber notes.

To ensure the artwork remains the center of attention, McCarthy kept the walls white and decor a quiet palette of cozy grays–no big splashes of color–for a clean, modern look. Yet to prevent the design from being too austere, she incorporated wood–particularly walnut, which appears in places such as the beams lining the living area’s lofty ceiling. “The furnishings were how I really tried to warm it up,” she says. “For example, the living area rug has a lot of soothing tones, and it picked up so nicely on the veining of the marble on the fireplace.” With geometric shapes and neutral hues, the furniture amplifies the renovated architecture as well as the waterfront view.

In the end, McCarthy says, the new open flow and connection to the outdoors are what make the home so inviting. “I really love that modern tropical effect you get when the doors are all open and the breeze is coming through,” she says. “There’s a great romance to it all when you walk in and see the water.”