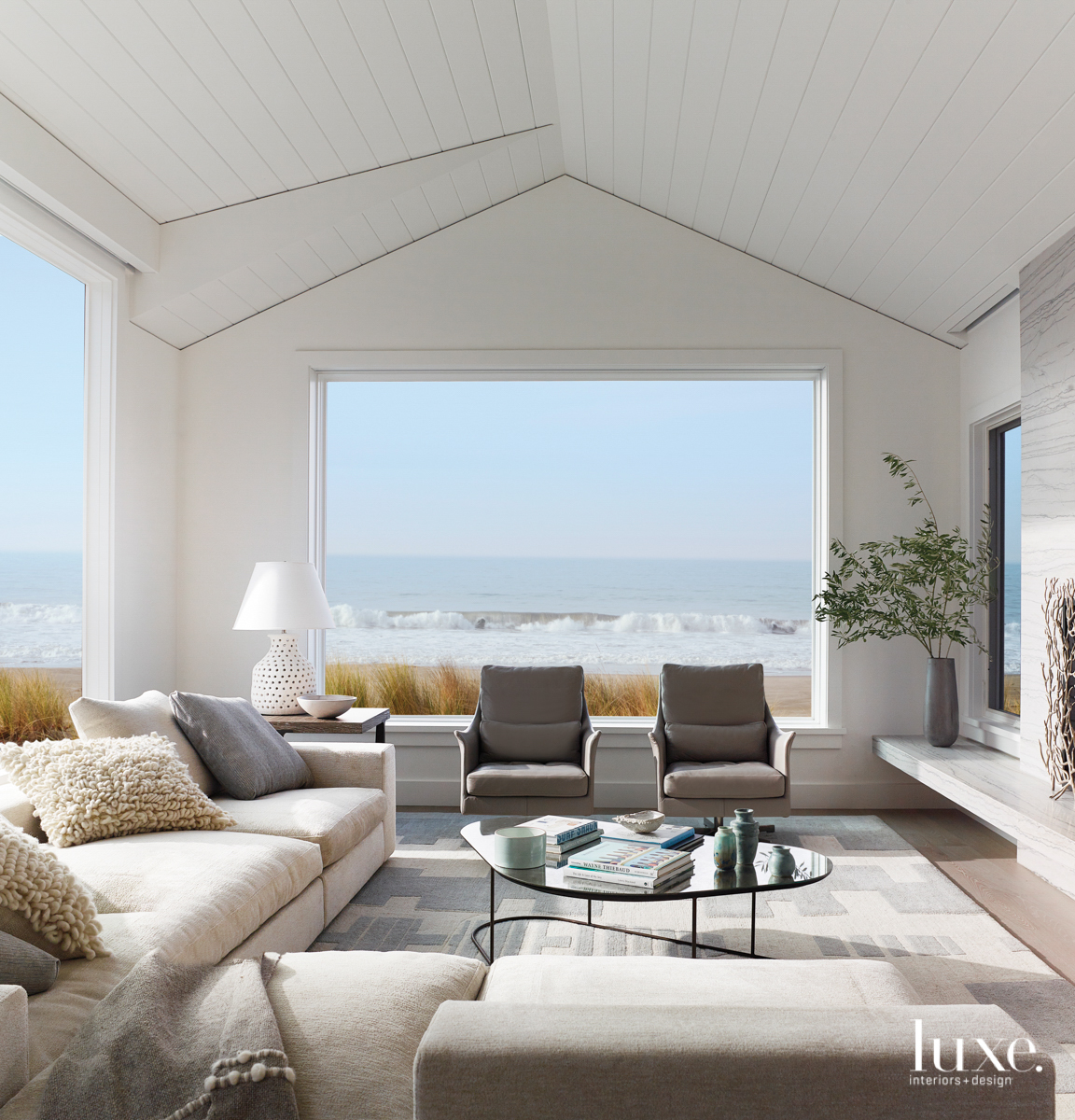 The post That Seaside Feeling: Enjoy The Beach Without Stepping Outside Of This California Abode appeared first on Luxe Interiors + Design.

My parents have always been drawn to the water,” says a Marin County executive who has fond memories of growing up on New York’s Long Island, also spending lakeside summers in New Hampshire and going to the beach in Southern California. Although he still visits his mother at her waterfront home in Santa Barbara, he’s always wanted his own place by the shore. He found it in the small town of Stinson Beach, just 40 minutes away from the full-time residence he shares with his wife. “It was a dream of mine to have a beach house—and to be right on the water is all the more special,” he says.

Designer Eugenia Jesberg was thrilled to be tapped for the project shortly after she’d finished decorating the couple’s more formal, Colonial-style home on the other side of Mount Tamalpais. In this case, the style would be decidedly more casual yet no less sophisticated. “We designed everything to bring in the views, colors and textures and to achieve the look and feel of what was outside,” Jesberg says.

The project involved taking down a 1950s-era house, and modern storm-safety codes required part of the new structure to be elevated. The higher vantage point, however, provided excellent design opportunities. “That view got amplified,” Jesberg says. “It’s pretty magical out there.” To maintain the focus outside, Jesberg and architect Steve Wisenbaker decided on a modernized version of a simple New England-style residence, punctuating traditional tongue-and-groove paneling with floor-to-ceiling steel-framed glass doors and huge plate-glass windows.

Wisenbaker’s first consideration was siting the outdoor living space. He then designed the house, and general contractor Larry Hadley and his team would build around it. “We found the sweet spot and left that area open. The outdoor connection enriches the spaces you live in,” Wisenbaker explains. That “sweet spot” is now the deck that intersects with the main living spaces and the master bedroom; it’s placed on an axis with the entry where Jesberg employed limestone to go up the steps, through the glass-enclosed foyer and out the other side. “It’s like a sky bridge,” she says, describing it as a place where the barriers between inside and outside seem to melt away.

Jesberg maintained a largely neutral palette within the main house and focused on texture to tell the story of its seaside surroundings. A tall fireplace is clad in marble with blue-gray veins, for example. “It has this rippled feel to it, and that was deliberate because the house is so linear and structural,” she says, noting that the feature also emulates the water. Crackled, pale blue backsplash tile in the kitchen reinforces that sentiment. The floor tile in the master bathroom resembles the cable knit of a fisherman’s sweater, and knotty oak accents throughout the house interpret the home’s rustic landscape.

The designer crafted a different narrative for the ground-level guesthouse. It’s a colorful extension of the owner’s art collection that includes pop art works by Ed Ruscha. “Color gives it some personality,” Jesberg says. “It doesn’t have the views, but it’s still a fun and light-filled space.” The structure opens into a courtyard that includes a large spa and bocce ball court. Landscape architect Corey Brooks transformed the flat area into a bas-relief of features that reach varying heights. He played to the narrow, rectangular space with a cedar-framed bocce court—a choice meaningful to the owner, who remembers playing the similar game of pétanque as a young exchange student in France. A few steps up from the court is a large spa with a prominent back wall and fountain. “To get the scale right, the spa had to have some substance so it would stand out from the garden,” Brooks says. “I did it to minimize its appearance as a hot tub and maximize its appearance as a water feature.”

Back on the main level, Jesberg ensured that her clients could enjoy the beach without ever having to step outside. She chose leather chairs in the living room, she says, “so you can just swivel around and get your binoculars out to watch the whales.” A furry chaise in the master bedroom provides a luxurious cradle from which to watch the waves crash beyond the deck. “It’s really about the tranquility,” Jesberg says. “You feel like you’re floating above the dunes—it’s a little compound in heaven.”

The post That Seaside Feeling: Enjoy The Beach Without Stepping Outside Of This California Abode appeared first on Luxe Interiors + Design.