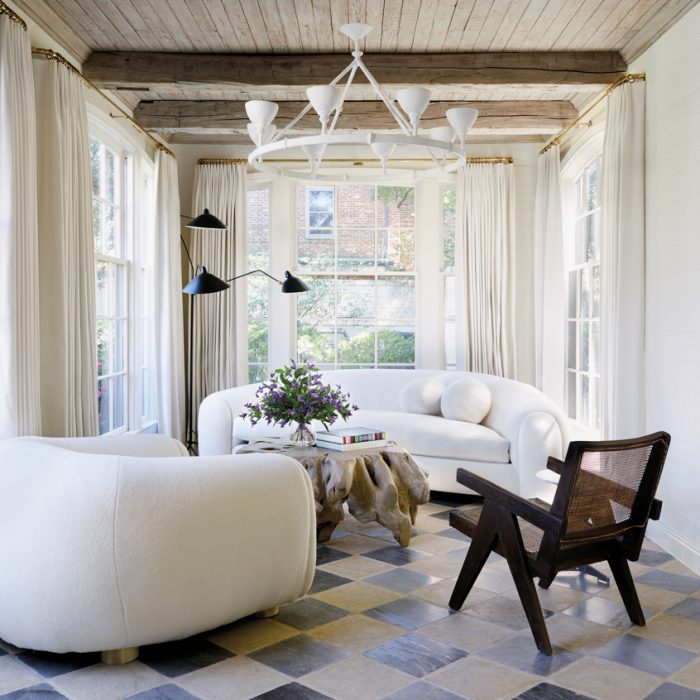 <![CDATA[ <p]]&gt;If there is any question whether art plays a huge role in the lives of this Houston home’s owners, one need only look around the dining room, where sculptural pieces by Roi James and Paul Rousso punctuate the ivory walls. Or one could take a glance inside the media room, where wood paneling perfectly frames a vibrant tableau by photographer Chuck Ramirez. Or one might also simply ask designer Meg Lonergan and architect Kristin Schuster, who redesigned the traditional house to accommodate much of the couple’s impressive contemporary-leaning collection. “The art was the impetus for everything,” Lonergan says.</p>

The project began when the owners sought Lonergan’s advice on whether to move forward with a house they recently contracted to buy in a coveted enclave of historical homes near the Houston Museum District. Lonergan had helped design the couple’s previous residence on a nearby street and understood their style, which she describes as “very modern with an undercurrent of appreciation for beautiful things that are old.” After touring the new property–a grand 1939 Georgian Revival decorated in styles ranging from country French to French Baroque–Lonergan quickly realized the architectural details were far too ornate for the couple’s streamlined furnishings. But the designer had an idea. “Parisians are known for taking these 18th- and 19th-century buildings and throwing in amazing 20th- and 21st-century furniture,” she says, “so my advice to them was to transform this house to give it a modern, Parisian apartment feel.”

There was a caveat, however: Lonergan felt that only an ultra-modern kitchen would do. “Unless the kitchen completely spoke to that yin-and-yang juxtaposition of Parisian apartments, it wouldn’t make sense.” So Lonergan and Schuster designed a kitchen with German manufacturer Eggersmann that set the tone for the house by pairing light lacquered cabinetry with the room’s existing wood floors and beamed ceiling.

Next, the design team considered the home’s most prominent architectural details. The parquet de Versailles wood floors would stay, as would the entry’s intricate iron stair railing. Schuster–who has since founded her own firm, Inflection Architecture–would replace the ornate moldings and paneling with profiles and proportions apropos of the period of the house, a move that “worked with the couple’s art collection,” she says. And walls would be plastered and painted an ivory hue, “so there was this blank canvas, which meant we could choose where we wanted to add the excitement,” explains Lonergan, who worked with design assistant Taylor Whaley.

That wow factor comes from the art–including works by Gavin Rain, H.G. Edwards and Cristina Guerrero–but also from design details inspired by those works’ colors and textures. In the music room, a lacquered ceiling provides “a little surprise when you look up,” Lonergan says. In the breakfast room, the subtle metallic sheen of a hand-painted Porter Teleo wallpaper catches the eye. The sun room’s surprise is the play on scale created by the rotund, Jean RoyÃ¨re-style polar bear sofa and chair. And in the dining room, it’s the sculptural glass-and-brass chandelier suspended from a mint-green plastered ceiling.

Such thoughtful, if unexpected, touches please these homeowners most. “I would describe our style as very detail-oriented,” the wife says. “We gravitate toward pieces with an artisanal quality, not necessarily things that read as fancy.” With that in mind, Lonergan, Schuster and builder Dennis Britt worked to fill the house with finely crafted details. In the husband’s bathroom, for example, Lonergan created the look of wall paneling by accenting floor-to-ceiling, book-matched travertine slabs with inlaid strips of brass. For the new mud room, Schuster designed built-in storage that accommodates “all the nitty-gritty details of how the family comes into and out of the house.” And in the music room–which evokes a Parisian parlor, with its gilded Louis Philippe mirror, Marco Zanuso Lady Chairs and Murano glass chandelier–hidden sound-absorbing insulation ensures maximum enjoyment of the husband’s impressive collection of audio equipment and vintage vinyl.

Not very long ago, a glittery, candy-colored collage by San Antonio artist Kelly O’Connor caught the homeowners’ attention. A psychedelic commentary on pop culture, the artwork incorporates papers sampled from vintage record covers, described by the owners as an “ironically whimsical” choice for the music room. The piece now hangs above the room’s ornate marble fireplace, creating a striking contrast that’s not lost on a couple who know a thing or two about the magic of mixing old and new.