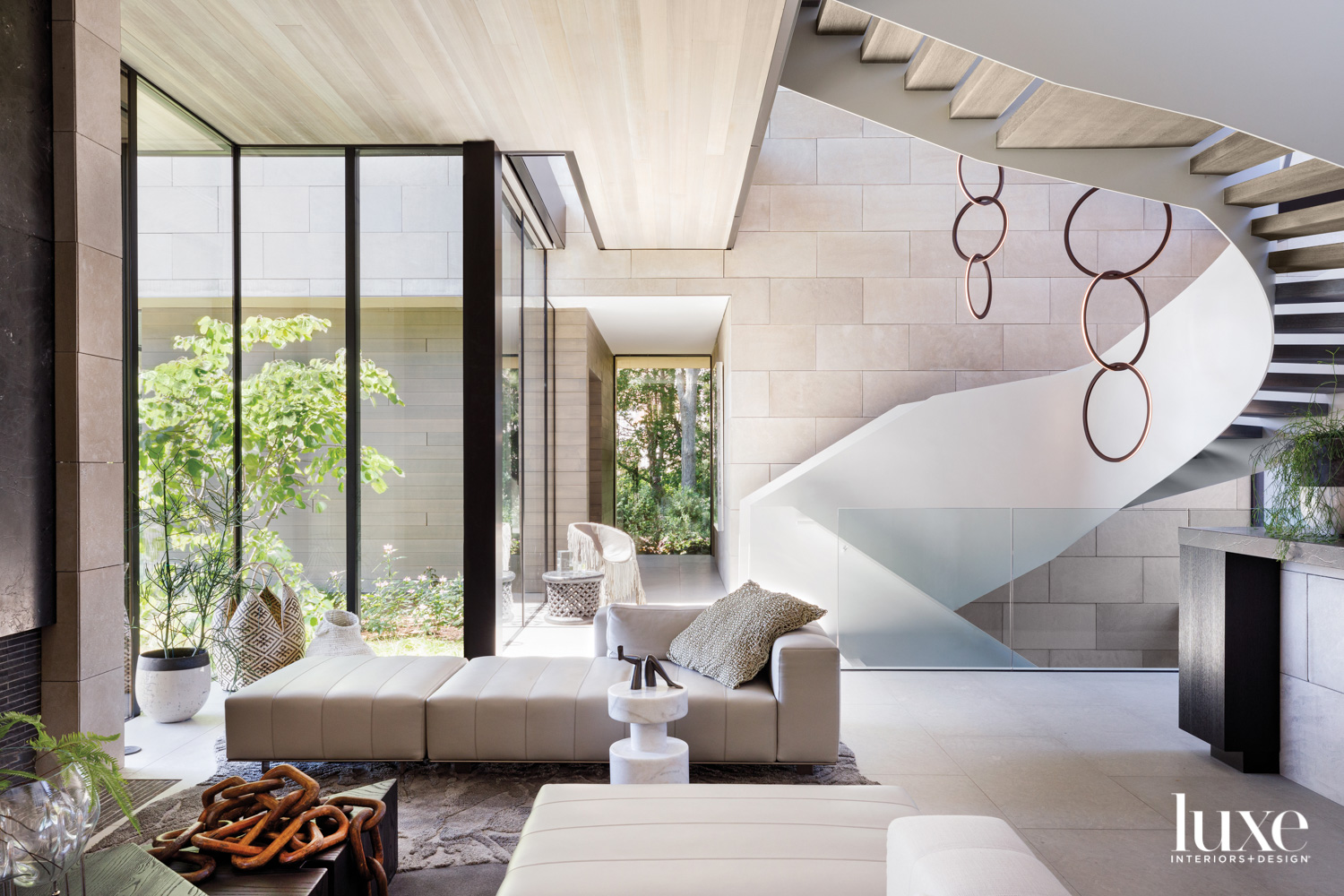 Imagine a lake house in Wisconsin. Maybe you’ve conjured up a rustic farmhouse—something that would make a charming setting for a romance novel or, depending on how your mind works, a thriller. Either way, chances are a sleek specimen of California modernism wasn’t the first thing that came to mind.

But take a boat trip along the edges of Lake Mendota and you’ll spot just that. The pared-back residence, distinguished by its mostly limestone-and-glass façade, evokes the essence of California cool—thanks to its architects, Ron Radziner and Leo Marmol, as well as the rest of their team—Stephanie Hobbs, Matt Jackson and Troy Newell.

The homeowners’ previous dwelling, located just down the road, leaned much more traditional. But for their new lakeside abode, on a unique site that sloped gently down to the water, they wanted something special. “We were interested in very simple forms, sort of hovering above this amazing setting,” says Radziner, who worked with landscape architect Lindsay Buck to ensure the environment was cohesive with the structure. “Something where you would come into the home and move through these sculptural forms and then take in beautiful vistas to the lake. We saw the landscape as an opportunity to really create this sort of native prairie with wildflowers and grasses, then slowly work our way down to the house where it would become more open and architectural.”

The streamlined rectilinear design of the residence—built by general contractor Joe Sagona and project manager Aaron Combs—creates a minimalist vibe, as does the restrained palette of limestone and stained-gray oak. But a two-story white circular staircase set against a glass backdrop provides a dramatic visual counter to the straight lines. It’s an unexpected but welcome architectural touch that sets the tone for the interiors created by designers Aimee Wertepny and Jennifer Kranitz. The task, the pair explains, was to create spaces that merge the home’s minimalism with the wife’s taste for polish and sophistication. “There’s a tension between glamorous and organic,” Wertepny says. “The wife really resonates with things that are a bit shiny, reflective and pretty.”

Working with the natural tones of the dwelling’s contextual shell, the designers opted for furnishings in black and white and higher-contrast decor, including a polished hood and full-height hardware on the refrigerators in the kitchen. “There are a lot of moments of reflective elements that felt a bit more glamorous for the wife,” Kranitz says. “We wanted both of these points of view to be really married and feel super seamless and intentional.” Since the soaring windows brought hues of nature into the home, the designers chose not to introduce more color. “We have a lot of green and blue, so there’s a really colorful backdrop,” Kranitz notes. “It made sense to let it be a little easier on the eyes so that we could let some of those other elements shine.”

Mixing finishes—antique brass, polished nickel, and matte black and bronze—throughout the space helped add textural intrigue, as did using materials in unique ways. In the dining room, the custom 17-foot table features Lucite-and-steel legs and the surrounding sculptural dining chairs are embellished with zippers. Upstairs in the main bedroom, an alpaca rug adorns the wall behind the bed, serving as a headboard of sorts. “We’re known for that element of surprise—and we’re always looking for opportunities to put a rug on a wall!” Wertepny laughs. “Could we have had an upholstered king-sized headboard there? Sure, but this is so much more dramatic and customized and really spoke to what the client was looking for—very soft, feminine and glamorous without having a specific sparkle to it.”

To add further coziness to the home, the designers introduced custom millwork and built-ins throughout. Most notable is the display behind the bar for the owners’ extensive tequila collection that also incorporates a series of protruding beams with crystalline pendant lights. “We inherited beautiful bones and a gorgeous set of floor plans,” says Wertepny. “But that was our moment to interject with detailing—something that was very simple and quiet and adds a little nod to the bling.”

The chance to turn tradition on its head made the project all the more fun for the designers. “When people think of a lake house it’s typically not this really sharp, tasteful modern glass box,” Kranitz says. “I’m just always struck by how cool it was that we were able to do this modern spin on a lake home—it feels so good.”