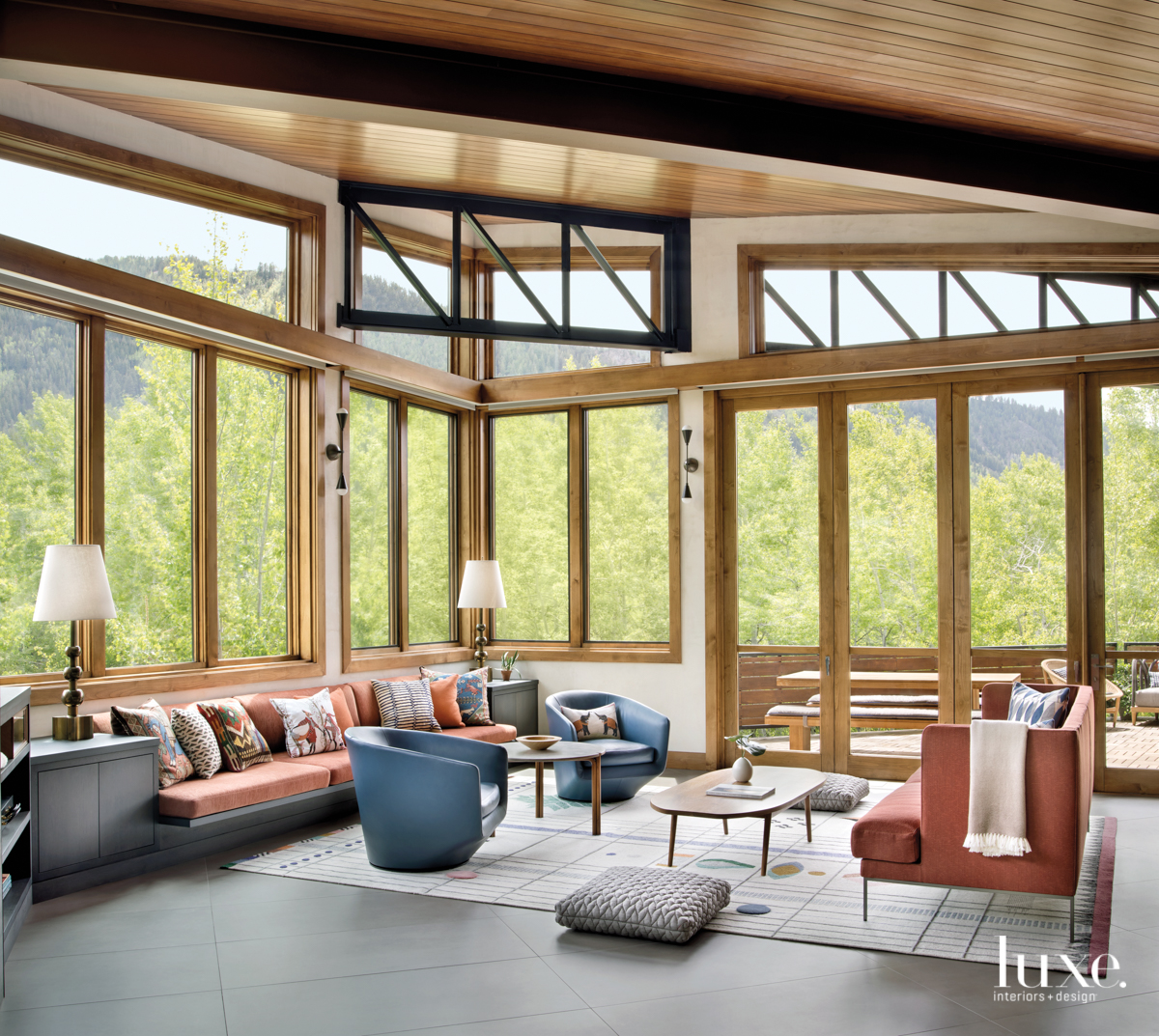 The post Old And New Come Together In A Modern Aspen Home appeared first on Luxe Interiors + Design.

<![CDATA[ <p]]&gt;The owner of this modern Aspen home says her friends generally regard her tastes as personality driven and one-of-a-kind. It’s that unique style that made her particularly enthusiastic to own a house with enough space to display her eclectic family heirlooms, ranging from Navajo rugs to wooden Nordic skis.</p>

“I come from a family of pack rats,” she says, lamenting the limited capacity of her previous homes in New York and California to harbor her beloved bequests. So she found room to spread her wings on a forested hillside residence, and hired designers Joe McGuire and Matthew Tenzin to express her eclectic modern aesthetic by weaving together fresh furnishings with her diverse collection of rugs, textiles and family antiques against a modern backdrop.

The house was constructed by residential designer and builder Tim Semrau, who was inspired by the site. “Aspen trees surround the house and their tall, narrow trunks combine with the mountain ridge behind the home to give a true sense of the area’s verticality,” he says. The house is mostly crafted from an industrial palette of steel, glass and metal; though the rich mahogany siding roots the dwelling in its forested environment.

From the beginning, the project was highly personal, a process the homeowner has long been comfortable with, since her mother was a designer and conversations around her childhood dinner table were often about interiors. “Having your home be a place upon which you spend a lot of emotional energy because it’s your haven is just an idea I grew up with,” says the homeowner. “And it can’t be your haven unless it relates to you.”

The designers whole-heartedly agree. “It was a highly collaborative process driven by the client’s creativity and international tastes,” Tenzin says. “She wanted us to help her come up with an overall plan, and she loves so many kinds of patterns, colors and styles, she needed help reining it all in and creating a sense of balance and harmony.” Excited to punctuate her inheritances with a new selection of textiles and gallery-worthy sculptural furnishings, McGuire and Tenzin began to create stylish rooms that also feel familiar and comfortable.

In the master bedroom, for instance, a wool-and-silk prayer rug from the family collection hangs on the wall, while a more recent acquisition, a Navajo rug, lies on the floor. The crimson colors and geometric motifs found in both pieces create cohesiveness. A pair of pillow shams printed with Art Nouveau painter Henri de Toulouse-Lautrec’s famous cancan girls are a novel choice in a room where ethnic patterns dominate.

Likewise, in one of the guest bedrooms, another tribal textile on the wall–a Two Grey Hills Navajo rug inherited from the homeowner’s great grandmother–effortlessly jives with the woven-leather bench at the foot of the bed. The neon green, cerused-wood bedside tables play a dynamic role in an otherwise neutral space.

At times, the sculptural quality of a piece outweighs its function. “‘Plush’ or ‘cushy’ were never requirements for the furniture,” says McGuire. “However, the shape of things was paramount.” Shapely elements include a cedar bench designed to look like a giant clothespin that brings Pop art-inspired form and function to the foot of the modernist glass staircase in the foyer. A Lindsey Adelman chandelier with asymmetrical brass joints and amorphous glass spheres is suspended from a slatted ceiling, adding clarity to the dining room in more ways than one.

Further eschewing the popular notion of a mountain home and drawing on a global aesthetic, a Robert Sukrachand walnut bed is topped with nothing more than a Japanese futon to match the low-profile of the piece and the Thos. Moser dining chairs are influenced by midcentury Danish minimalism. The great room (vaguely Southwest inspired with its shades of sandstone and sky) features curvy swivel chairs with cozy dimensions and a built-in rectilinear sofa whose rigidity is softened with an assortment of snuggly pillows.

Two of the most striking pieces in the home, the black De La Espada Nest chairs that flank the stone-tile hearth, initially gave the designers pause. “We were unsure about this unconventional seating arrangement in front of the main fireplace,” says McGuire of the decor’s statement-making moment. “But the client had a clear vision for them, and they turned out to be whimsical and sculptural focal points that also serve as a quiet retreat.”

In a home where unconventionality is celebrated, the harmonious vibe McGuire alludes to might seem elusive, were it not for the time-tested idea that the whole is greater than the sum of its parts. “Think of this house like jazz,” says Tenzin. “The occasional off-key notes create a higher-level harmony, and a lively sense of personality and authenticity.”

The post Old And New Come Together In A Modern Aspen Home appeared first on Luxe Interiors + Design.