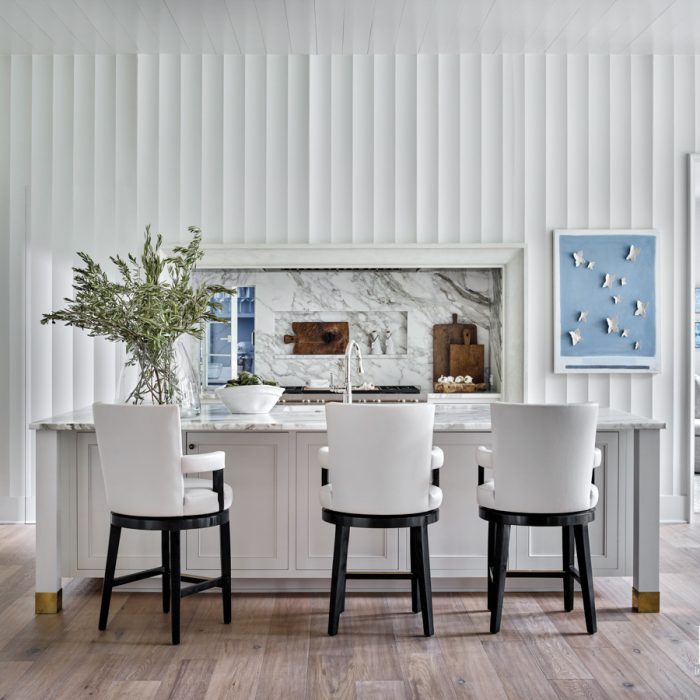 Smith’s method is a big reason Eydie and Blake Okland enlisted him to design their new home in Charlotte, North Carolina’s stately Tuckaway Park. “I think a lot of architects design what they like or want, but Frank really listened to what we wanted in a home and created it as such,” says Eydie. She and her husband requested something reminiscent of an old English manor–an homage to Blake’s British ancestry–but with a “timeless, modern” interior.

Teaming up with designer Kimberly Mauney, Smith took that request and ran with it; even the arches of the stair railing are a subtle nod to those found in English Gothic architecture. “But those English manor homes were designed for protection and were dark,” Smith explains. “This one is open and full of light.”

Having collaborated with Smith in the past–frequently specifying interior finishes for his North Carolina residences–Mauney had come to admire his big ideas and unorthodox process. “Frank really thinks in three dimensions,” says the designer, who joined the project by way of his recommendation. “The beauty of his residences is that they’re very well-thought-out designs where everything flows seamlessly.” For example, expansive windows along the front of the house align neatly with those in the back, resulting in views that go straight through the public spaces, past the glass railing of the bluestone loggia and to the golf course beyond. Says Smith: “It’s a completely see-through house.”

But the apparent simplicity of his design for the Oklands belies a more complex hidden layer. “What you don’t see are the many pathways that allow someone to slip from one room to another unnoticed,” explains Smith, who called on general contractor Bryan Gerrard to execute this maze of entryways. The result is a very human house; one that allows movement organically through the space and cleverly connects each room so that one never arrives at a dead end. Says Eydie: “There’s a continual flow, a somewhat figure-eight design.”

Mauney says the homeowners are among many recent clients to request multifunctional modern spaces. “A living room might become an office in the early morning because it’s where the sun rises and you can enjoy a cup of tea,” she explains. “I think the fluid floor plan allowed me to design in a way that allows the Oklands to use each room for various purposes.” She ensured the interiors felt as bright and airy as the architecture, using luxurious materials and a light hand. “Eydie has great taste. She knew what she wanted, whether it was dark sofas or a special wall treatment,” says the designer. “She also wanted to create a home that would take their daughters through their teenage years and into their adult lives and the expanding family dynamics that would come with weddings and grandbabies.”

Employing clean lines and a warm oyster color throughout allowed treasured artworks to serve as punctuation points and hits of saturated shades (sapphire, aubergine, powder blue) to have greater impact. The kitchen is one such space, where a butterfly-themed work by artist Caroline Boykin appears nearly ready to flutter off its pale backdrop.

For this room, the design team adapted the traditional fluted details of classical Roman columns, flattening them for a dimensional feature wall that smartly conceals the door to the scullery. A hinged window to the left of the range, cut out of the dramatically veined marble backsplash, is the sole indication this storage space exists. Mauney says the rest of the room was made to look and feel like a living area since, well, “everyone ends up in the kitchen.” Sans pendants to illuminate the honed Calacatta Gold marble countertops, it reads more like a gathering place that “just happens to be used for cooking,” the designer notes.

The success of the house is evident from the moment one pulls up to the circular drive–one of landscape architect Bruce Clodfelter’s elegant contributions. “It’s almost like a fishbowl effect,” Eydie says of the ability to look straight through the home to the golf course beyond. “That’s one of the things we love most–this house just flows.”