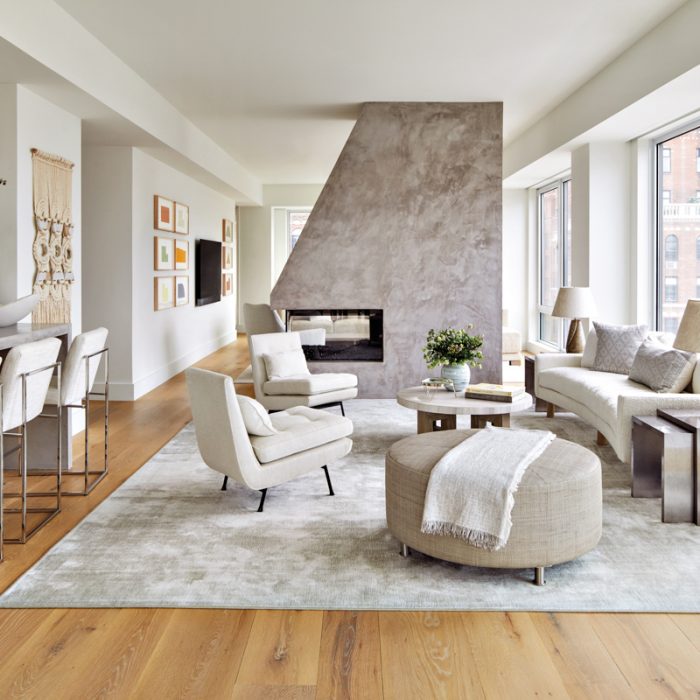 The post How This New York Penthouse Became The Ultimate Retreat For World Travelers appeared first on Luxe Interiors + Design.

James Huniford makes pulling off a neutral palette look easy. A prime example: the glass-wrapped Chelsea penthouse he designed as a vacation home for his clients, where views include those of New York’s celebrated landmarks, from the Statue of Liberty to the Hudson River to The High Line’s manicured park. But Huniford’s elegant interiors–a composition of geometric furnishings in shades of white, cream, beige and gray–form their own sort of skyline, with the interior designer’s mix of tactile materials adding interest and nuance to the color scheme. After all, he says, “One texture would be boring.”

The couple, who called Huniford after seeing a model apartment he had designed, were looking for a new configuration for this penthouse, one that was equally ideal for a visit from their adult children, a dinner party for 15 or a quiet evening for two. “We were in sync with how they wanted to live,” Huniford says, “and they had a strong point of view about clean lines and a lot of white and sunlight.” One of the most important things Huniford had to consider was how the various groups of people might occupy the penthouse and how the layout could accommodate each scenario. Working with builder Mark Dobbin, he carved intimate spaces from the main living room that maintain an open sense of flow. “The goal was to use simple design elements without ornamentation,” he says. A floating fireplace set in angular cast concrete separates the casual family area from the formal living area, which shares space with the open kitchen and dining room.

The couple owns homes in many of their favorite locales around the world, and they wanted their Manhattan residence to be a place to retreat. “They love the idea of luxury and uniqueness,” says Huniford. As a result, much of the furniture is custom, and fabrics and rugs were sourced from specialty weavers. Window seats that Huniford designed, for example, feature cushions upholstered in a high-pile handwoven fabric from the venerable Nantucket Looms, while the rug in the entry hall is by Elizabeth Eakins. “I love working with these artisans who are making something that’s not mass produced,” he says. “That was important for these clients.”

Objects throughout the home reflect this same thoughtfulness. A fiber piece by artist Sally England hangs on the living room wall, and, on the dining table, a series of cast-concrete candelabra by Brooklyn-based Vonnegut/Kraft is brutalist, urban and entirely unusual.

Texture on the walls includes a pigmented plaster in the entry, where one stripe is flat and the next is waxed–“inspired by Agnes Martin,” reveals Huniford. “I love her work.” The den is wrapped in flat wood veneer paneling, and the master bedroom wallpaper is comprised of individual sheets of bark skin that are hand-applied. Drawing from the work of Billy Baldwin and Karl Springer, Huniford covered a console in painted grass cloth, while the kitchen’s polished concrete complements the fireplace.

The views from inside the penthouse are stunning, but the vistas from the balconies and the roof terrace “are magical,” Huniford remarks. He designed custom furniture for the terrace, including a mahogany sectional and boxes for plantings. “That kind of tailoring creates something very special,” he says. “Everywhere you turn, there’s something to see.”

It’s been said that originality flourishes within constraints, and with its subdued colors and thoughtful design, this vacation residence is a case study. “I love a client who knows what works for them,” says Huniford. “It helps me expand my creativity, and I can exceed their expectations.”

The post How This New York Penthouse Became The Ultimate Retreat For World Travelers appeared first on Luxe Interiors + Design.