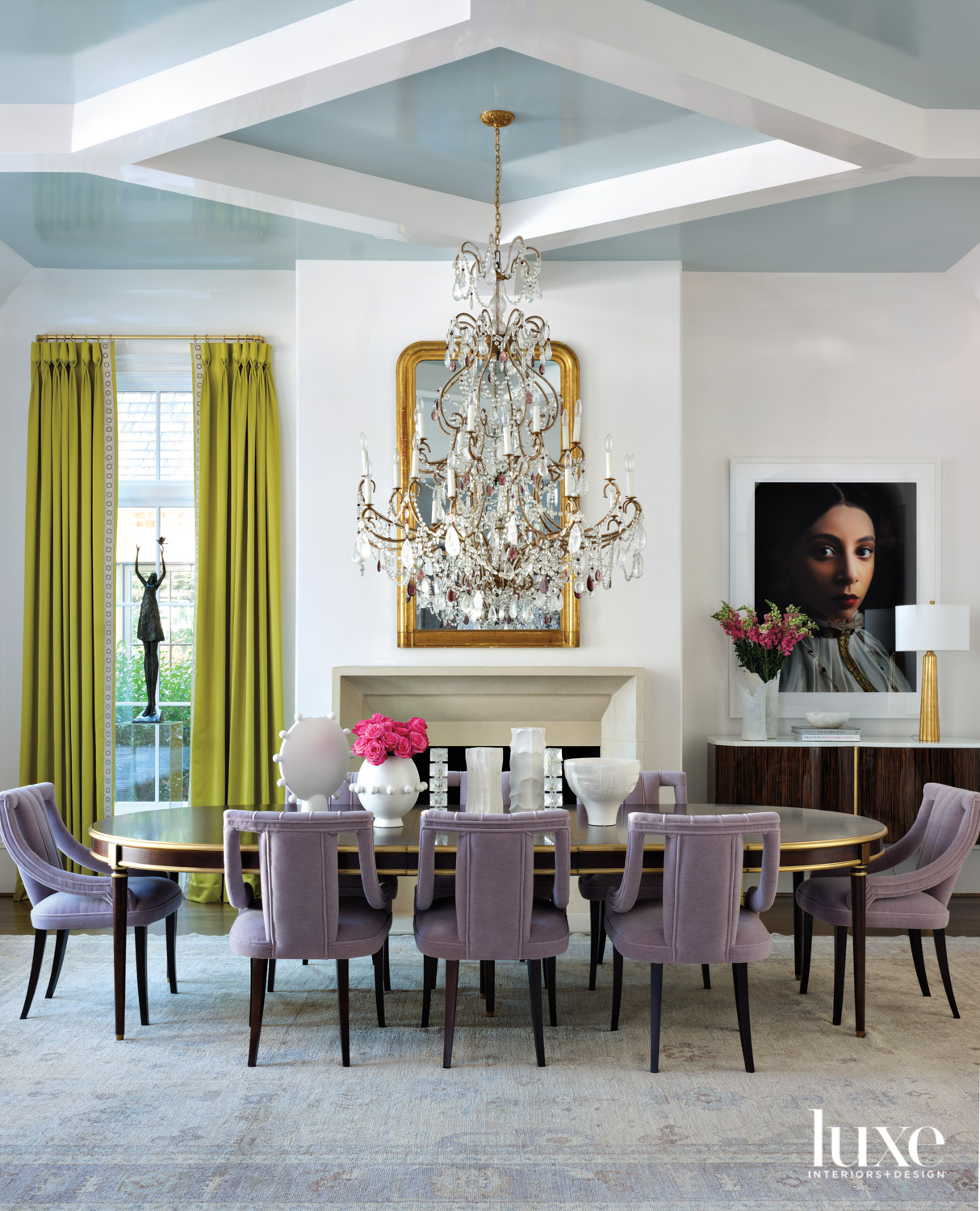 The post Fall Head Over Heels For The Glam Moments In This Grand Atlanta Manse appeared first on Luxe Interiors + Design.

A mural depicting hand-painted birds and flowers appears to dance across the walls of an Atlanta home’s expansive two-story foyer. It makes for a high-drama moment that appeals perfectly to the modern tastes of the owners, who enlisted designer Melanie Turner to refresh their English manor-style abode, originally masterminded by architect Dietrich T. Logan. “We have very high ceilings and wide, open spaces,” the homeowner explains. “So, we looked for a designer who could make those feel warm and cozy.” Inspired by the home’s majestic envelope, Turner thought to do something quintessentially British in her mind’s eye: bring nature inside. “I wanted to create something like a classic Regency floral wallcovering, but scaled up,” she says of her playful twist on tradition.

The opening statement sets a welcoming tone for the rest of the home, which Turner approached with similar goals: making commodious rooms feel warm and inviting while marrying her clients’ styles in unique and artful ways. “He likes monochromatic and edited with clean lines, while she’s glamorous with a love of color, pattern and layers,” the designer says. “What they both wanted was a sense of peace and calm.”

Within view of the aviary-like foyer, a bank of floor-to-ceiling windows in the living room follows suit, ushering in a flood of tranquil backyard vistas. “The optimization of natural light was a central focus of this project,” says Logan, who used the sun’s orientation to help determine the best locations for glazing. Here, Turner took a cue from the verdant surroundings, flanking the fireplace with a pair of commanding abstracts by Birmingham artist William McLure.

To bring intimacy to the voluminous room, she divided the floor plan into four separate seating areas anchored by custom banquettes and back- to-back sofas. “The room’s scale required breaking things down into smaller arrangements, and within those incorporating bulbous and substantial pieces,” explains Turner, noting she partnered sofas with side tables to form larger silhouettes. In turn, layers of texture in the upholstery and even a cascading feather-like chandelier add warmth and ambience.

Turner utilized the same strategy in the main bedroom, a vast sanctuary with a 32-foot vaulted ceiling made cozier thanks to strategically grouped furnishings and texture-infused neutrals. “You just want to curl up and cocoon in there forever,” says the owner. “It’s cozy, sexy and everything a bedroom should be.” Turner responded to her clients’ desire for a canopy bed via a custom leather-wrapped version lined with luxurious wool curtains, opting to define an adjacent seating area with a plush rug to form “a space within a space for that intimacy,” she adds. Amid the sea of neutrals, bespoke wallpaper inserts subtle movement and pattern while a dramatic Erik Madigan Heck print reigns above the mantel “for a high-fashion moment that appeals to her tastes,” notes Turner of the client.

Not only in the living room and main bedroom but also throughout the house, art selections play an important role in channeling each homeowner’s style while creating an inviting look and feel. “There’s a constant play of masculine and feminine, negative and positive—with any intensity in color or art punctuated with open areas allowing the eyes to rest,” Turner explains. On the dining room walls, for example, a duo of Dusty Griffith encaustics blends seamlessly into the backdrop, juxtaposed with a striking Fabiola Jean-Louis archival pigment print in concert with chartreuse draperies, lavender upholstered chairs and a dazzling French antique chandelier suspended from the lacquered blue ceiling. “It’s the most traditional of all the rooms but with fashion-forward colors in the mix,” says Turner, who also chose haute hues for the breakfast room. Hanging a vivid Hunt Slonem butterfly painting against walls that feature a plaster relief design (reminiscent of Henri Matisse’s leaf cutouts) imbues a layered look “that’s comfortable and organic,” she notes, adding, “We love to add architectural elements and texture to a room—it makes things more personal.” A white- plaster chandelier, Balinese tree-trunk dining table and voluptuous custom chairs covered in a coral velvet underscore those sculptural effects.

On the opposite end of the spectrum, a stag print by the late Todd Murphy helps establish a masculine, monochromatic aura in the library. Suspended above the mantel between floor-to- ceiling shelves lined with books bound in uniform beige tones, it offers an orderly and calming influence. But even here, hints of pattern and color in the throw pillows and dusty purple upholstered furnishings impart a feminine touch. “There’s a little bit of both homeowners everywhere,” says Turner. Adds the client: “How Melanie was able to combine both of our tastes really was the ‘wow’ factor for me.”

The post Fall Head Over Heels For The Glam Moments In This Grand Atlanta Manse appeared first on Luxe Interiors + Design.