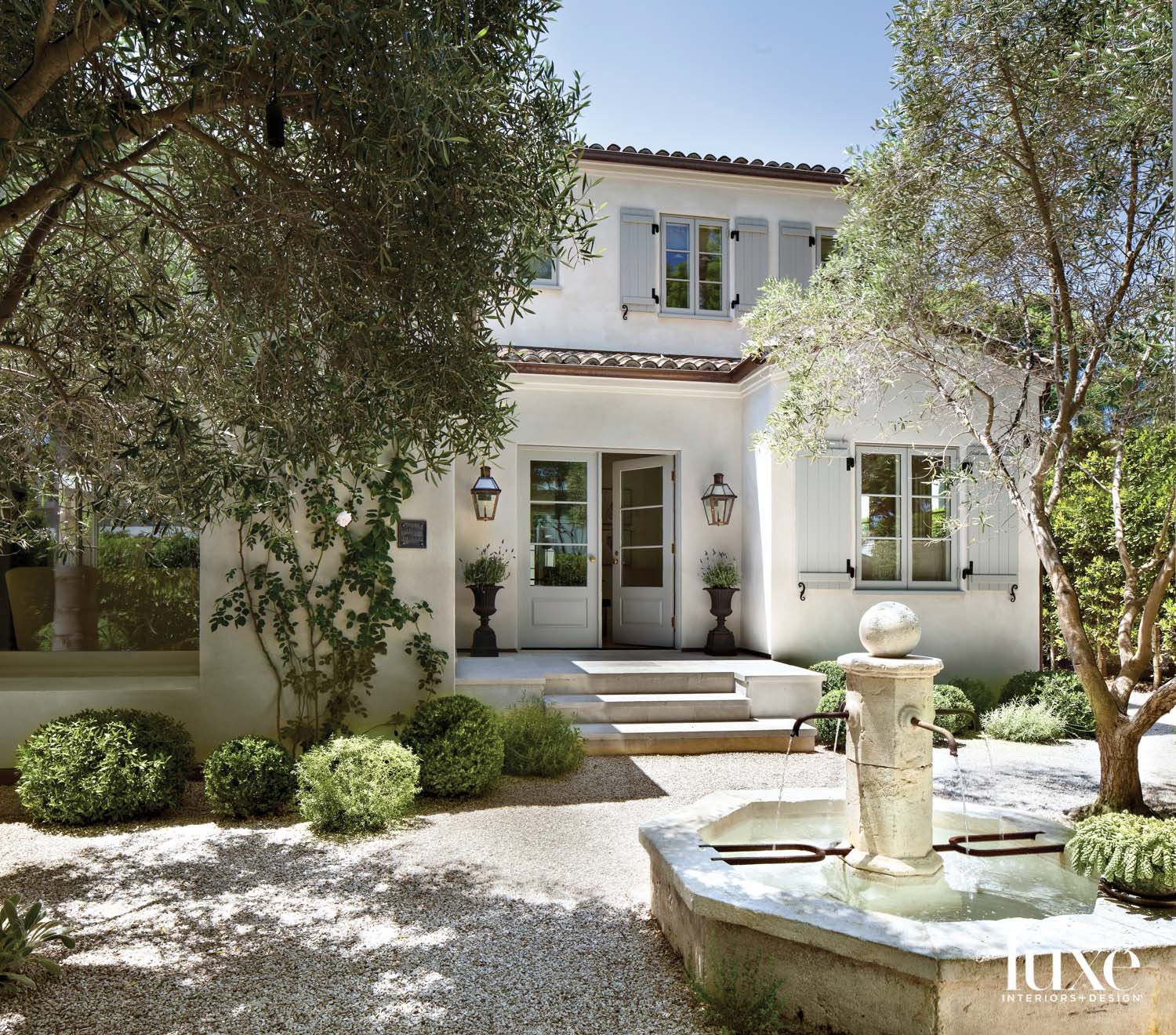 The post Fall For The Romantic Look Of An L.A. Gem That Channels Provence appeared first on Luxe Interiors + Design.

<![CDATA[ <p class="p2"]]&gt;To arrive at Paul and Audrey Hanneman’s West Hollywood home is to visit the South of France. A tall ficus hedge shields the house from the street, and when stepping through its front gate—gravel crunching underfoot—rather than the hum of nearby Melrose Avenue, there’s birdsong and the burble of an aged stone fountain. It’s a cinematic welcome envisioned largely by Paul, a retired film executive and admitted Francophile, who first fell for <i>le Midi when he saw To Catch a Thief. “I love the people, the language, the food and wine, the Louis XVI furniture and the architecture,” he says. And the home, named Maison Lumière, is the embodiment of all he admires.

From Èze to Draguignan, Paul and Audrey have vacationed often in the region, enjoying summertime brocantes and alfresco dining at local bistros. Distilling those memories into a visual wonderland befitting an L.A. neighborhood provided a sensory-driven design brief that captured architect Paul Williger’s imagination. “I welcomed the adventure,” Williger says. “You don’t see a lot of Provençal style here, even though the vernacular is appropriate to the Southern California climate.”

Working with general contractors Jim Hanley and Megan Turner, Williger crafted an authentic-feeling home, right down to operable wooden shutters, but kept it “cleaner, fresher—like we were updating an old apartment in Paris,” he explains. “The original home was compressed, so adding a second story allowed us to open up to the yard.” To that end, the front door was glazed, ground-floor walls were replaced with bay windows and French doors, and the upstairs bedrooms were given balconies. “It’s an oasis,” adds Hanley, noting that plenty of house can be realized on a small lot, “if it’s laid out well.” (This home is just about 2,800 square feet.) “It’s also about quality,” he says. For example, the team tested many finishes to achieve the perfect hue and traditional smooth finish of Provençal stucco, and great effort was made to source and match wood flooring and roof tiles to the ones the Hannemans had already found in France.

Paul, who is studying for his Master of Interior Architecture degree at UCLA, observes that French design is like French fashion: “It looks effortless yet is clearly considered.” The home’s interiors, realized by the couple’s longtime designer Elizabeth Dinkel, bear out this truism. “They represent the culling of many years of collecting—basically our favorite things—pulled together with the help of Lizzie’s amazing eye,” says Paul. He points to objects like the Neoclassical side tables in the family room found at Le Marché aux Puces de Paris Saint-Ouen. Starting with a neutral backdrop to support the couple’s art collection, she began layering in playful pieces such as the Vladimir Kagan sofa—the first piece the couple bought for the project—in the living room. “They liked the contrast with the antiques,” the designer notes.

Elsewhere, Dinkel combined a bench covered in leopard-print silk velvet and the Lucite lamps by Pierre Cardin. In the dining room, she surrounded a contemporary steel table with the couple’s Louis XVI-style chairs, adding café curtains that billow in the breeze. “Our intention was to flood the room with light while still providing a bit of privacy,” she says. “We wanted to highlight the style of the windows and the decorative window hardware without obstructing it.” And in the Hannemans’ bedroom are a Piero Lissoni platform bed and Murano glass lamps. “I love the mix of periods,” she says, equating the home’s style to the decadently blasé vibe of St. Tropez’s famed Club 55.

But it’s the exterior spaces, inspired in part by the legendary designer François Catroux’s gardens at Les Ramades and conceived with another longtime Hanneman collaborator, landscape designer Nikila Rigby Ellis, that perhaps feels the most Provençal-like. “Large trees make a garden feel bigger,” notes Ellis. She placed a pair of fruitless olive trees in the front yard and added cypress for color and verticality, boxwoods as sculptural elements and jasmine and citrus for fragrance. Because the property is small, Ellis employed another clever trick: utilizing crushed limestone for the hardscape. “By not defining a driveway and walkways, it gives a more expansive feel.” The result is a garden that “lends itself to hospitality,” she says.

Whether the Hannemans are hosting friends or family or just enjoying the house à deux, they are assured enchantment. “There’s a magical quality of light and peace here,” says Paul. “It’s the indoor-outdoor ease of life that we so love.”

The post Fall For The Romantic Look Of An L.A. Gem That Channels Provence appeared first on Luxe Interiors + Design.