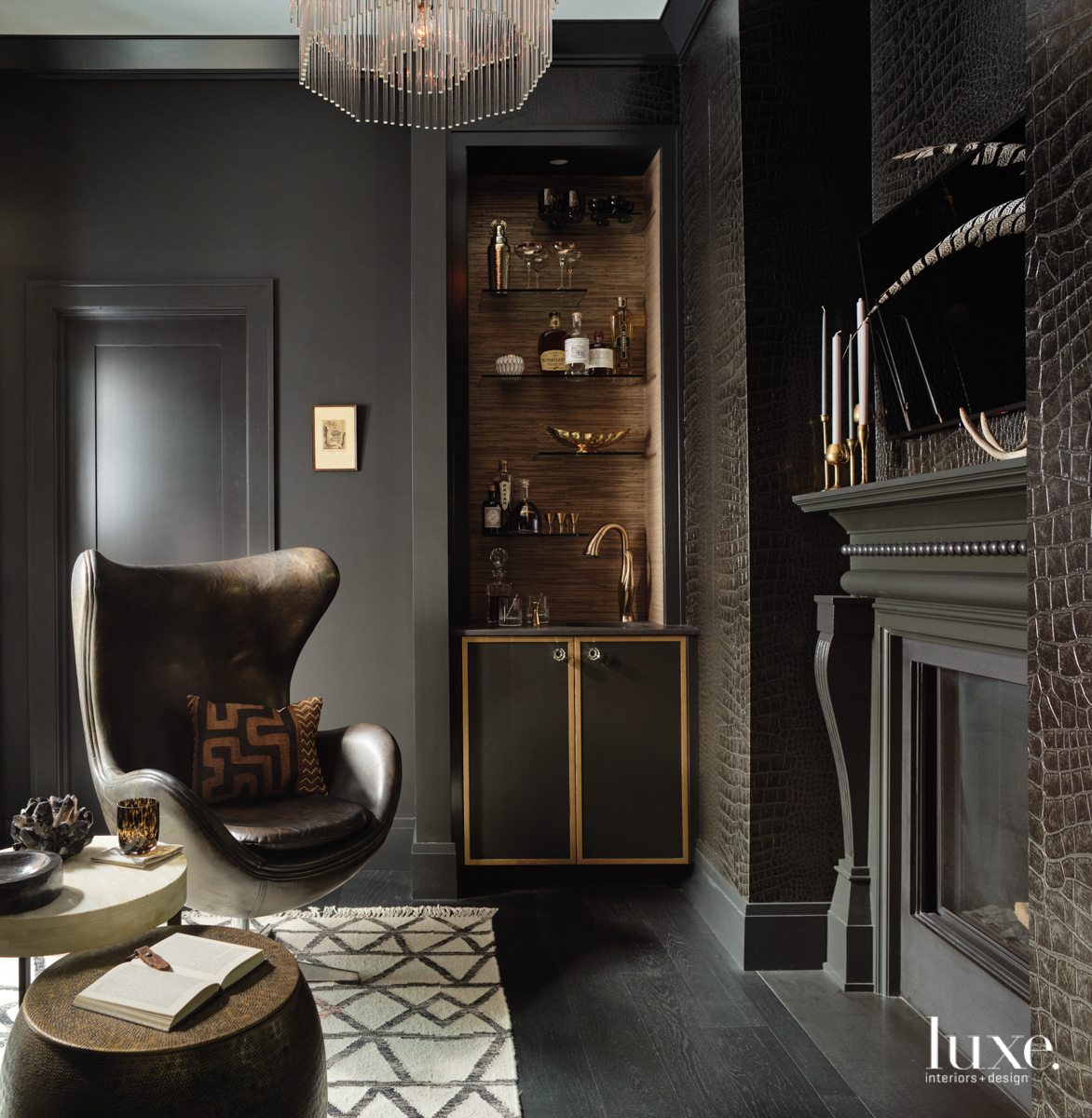 It wasn’t interior designer Suzanne Childress’ preservation chops that landed her a job updating an 1890s bungalow in Ashland, Oregon—rather, it was her love of wallpaper. Her clients, San Francisco-based Kirsten Ziegler and her husband, J Frederick, had bought it as a second home a decade earlier and decided it was time to renovate. They were finalizing plans with general contractor Brad Youngs, of Brad Youngs Construction, when Kirsten saw a project that Childress had done. “I was searching online for ‘cool, modern wallpaper,’ and there was an image of a design by Suzanne that grabbed me,” she recalls.

Childress did more than select an assortment of dramatic wallpapers for the project, though. She proposed a series of structural changes that made the 1,000-square-foot house at once functional and inviting—from moving walls and reconfiguring rooms to outfitting the spaces with creative storage solutions. “I love old houses,” says Childress, who once worked as an attorney with the Environmental Protection Agency. Her side gig—redoing her historic home in Annapolis, Maryland—set the stage for a major career shift and an eventual move west. “If a house has quality bones, then I’m all about working them into a new design concept,” she says. “But this house was a real patchwork; there wasn’t anything worth preserving.”

Kirsten and J, who both work in the tech world, embraced her suggestions. “We were so enamored with the home’s location—we’re a block from the theater complex and can walk to downtown,” says Kirsten. “It certainly wasn’t because the house was so gigantic or because the interior was so darling.”

That meant a gut renovation and installing all new floors, windows and moldings. Childress tweaked the plans to transform what had been envisioned as a semi open-plan kitchen into a more traditional space. She also worked with Youngs, who has since retired, and his team to bump out a wall to include a small eating area. What the house lacked in size, it made up for in vertical space, so Childress capitalized on the high ceilings, tucking base and top cabinets everywhere she could. What was once a second bedroom became a cozy parlor featuring a two-sided fireplace that opens to the adjacent living room. Childress was also able to carve out two additional spaces for the couple: a tiny study and a nook that holds a sofa and a TV.

Finding a balance between old and new was her goal. “Kirsten and J were worried when I suggested dropping in more doorways,” says Childress, “but the spaces would have been too busy had we left them open. Now the rooms unfold as you walk through them.”

Taking a cue from what Childress calls “the rock-and-roll edge to Kirsten’s style,” the designer incorporated deep tones to dramatic effect. She set off the gray-painted walls in the living room and part of the kitchen with black moldings and window frames. In the parlor, she paired black gloss paint with a similarly hued imitation crocodile wallcovering for an atmospheric air, accented by touches of gold and brass in the furnishings and hardware. Finished in black paint with brown undertones, the kitchen cabinetry creates a striking foil to the marble-like porcelain counter and backsplash as well as the upper cabinets stained a rich brown. “It took a lot of rounds to get the stain right, but it plays so nicely with the tones of the brass and black,” Childress notes. “Brad had the knowledge and expertise to make it happen.”

Considering the diverse wallcoverings that Childress selected, Kirsten and J are hard-pressed to name a favorite. J leans toward the woodland animal paper in the study, while Kirsten says that though she was initially unsure about the enchanted-forest-themed print in the master bedroom—appropriately called Midsummer Night—she now loves it. “I wondered if I was going to hate it in six months because it’s so different, but J really liked it,” she says. “We looked at other ones, but I said, ‘Let’s just do it,’ and I’m so glad we did. It’s really sultry and ethereal with the lights on.”

Childress believes the fact that the couple lived in the house before they started renovating is key to the project’s success. “It’s nice if you can get the idea of the flow and what’s working and what’s not. I’m always curious when a client says, ‘Oh, we never go in there’ or ‘We never use that.’ Most of us can’t afford to have rooms you never go in,” she says. “You need to make the most of all your spaces. That was what I wanted to do here—to make all the rooms spaces they really wanted to be in and enjoy.”