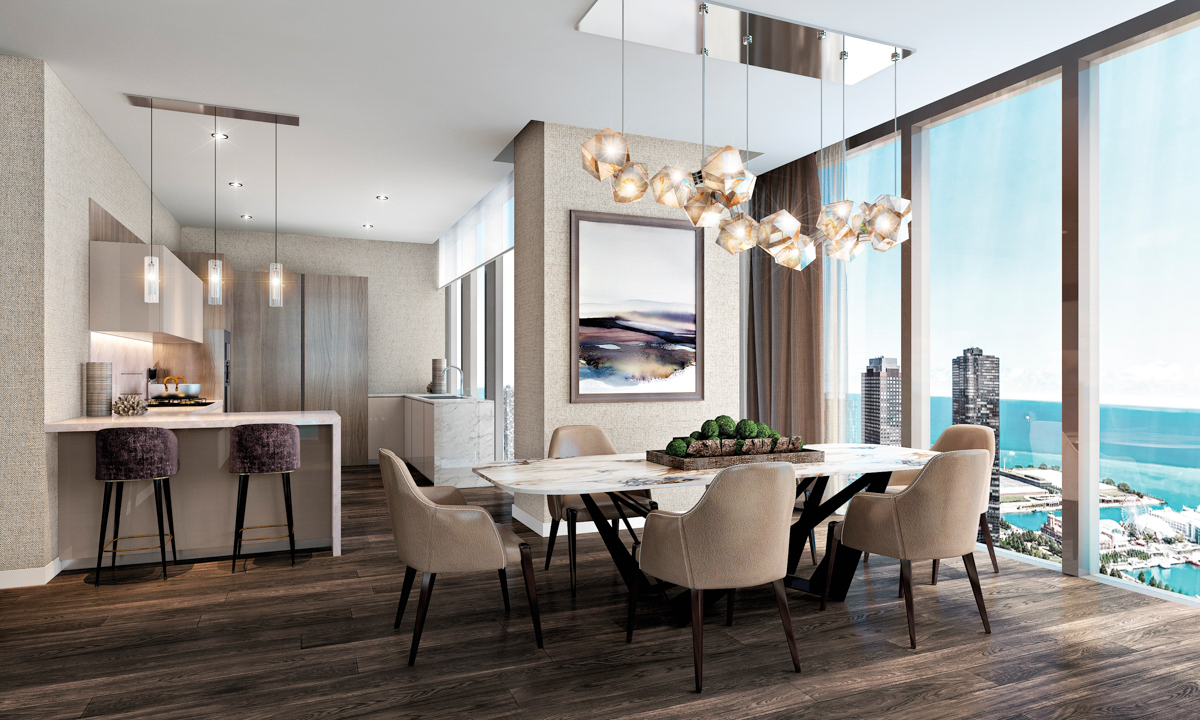 The post Why You Could Say The St. Regis Chicago Is A True Gem appeared first on Luxe Interiors + Design.

Four years in the making by Magellan Development Group, The St. Regis Chicago (rebranded from Vista Tower) officially opened to residents in December 2020.

At 101 stories tall, not only is it the third-loftiest building in Chicago, but it’s also the world’s tallest building designed by a team of women architects and designers, led by architect Jeanne Gang of Chicago’s Studio Gang. As impressive as its pedigree is its faceted exterior inspired by crystals.

Inside, the design continues the gemstone theme for each of the finish packages offered in 393 residences, including 20 single-floor penthouses complementing the 191-room hotel below (opening this summer), as well as a restaurant from Alinea Group. Another residence perk: the 47th amenity floor, with a pool, spa, gym, exhibition cooking area, golf lounge, wine tasting room and more.

“With so many areas,” says Kathleen Dauber, partner with HBA Los Angeles who oversaw the design, “we selected a vocabulary for the flow and open spaces to intuitively guide the guest to each destination within the floor.”

The post Why You Could Say The St. Regis Chicago Is A True Gem appeared first on Luxe Interiors + Design. 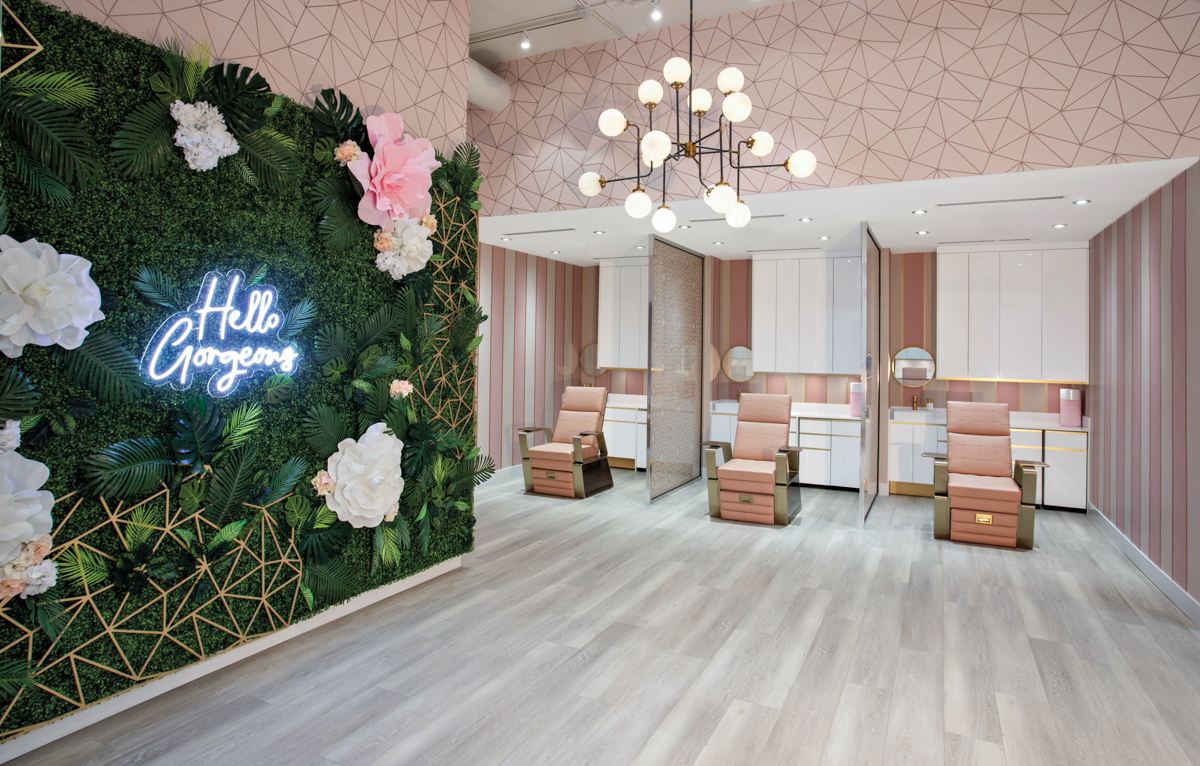 Think pink (and rose gold) at DashBar in Brickell, where the new salon and spa is dripping in dreamy design details and Instagrammable moments.

Created by entrepreneur Carla Oliva after she tired of running to different spots for beauty services, guests can kick back in custom chairs conceived by Oliva, as a beauty squad performs services such as a manicure, pedicure and blowout all at once. Sixty minutes and you’re out the door—right after snapping your beautified “after” photo in front of one of their fun backdrops. As much of the sports world grapples to stay relevant in an age of digitalization, fast-moving media cycles and shifting consumer preferences, a centuries old gentlemen’s game rooted in tradition is quietly, and rapidly, garnering national acclaim. And it is doing so by eschewing many industry trends.

Polo, the “Sport of Kings,” is hardly a newcomer to the global stage. It was a featured competition in five Olympic Games (1900, ’08, ’20, ’24 and ’36), and the oldest club, the Calcutta Polo Club, dates back to 1862. Artifacts suggest rudimentary versions of the game were played as early as 200 BC—though, by all accounts the modern form originated in India in the mid-19th Century.

The sport’s notoriety spread quickly throughout the late 19th Century and early 20th Century, particularly among Europe’s nobility and upper social classes. It was introduced stateside by James Gordon Bennett, a New York publisher, who hosted the first game in the United States in 1876 after seeing a match during a visit to England a year earlier.

Yet, for more than a century, polo remained largely out of the mainstream in the U.S., receiving far less fanfare than other equestrian sports like horse racing and rodeo. Its niche positioning owed in part to the rigor of the game and significant costs, which made it largely inaccessible to much of the public.

To be sure, the nature of the game has not changed much. A physically demanding sport, both on horse and rider, polo requires competitors to be in peak condition. It’s not uncommon for a well-trained polo horse to cost as much as $200,000. Considering that riders often change mounts at each of six chukkers, or periods of play in a match, to keep their horses fresh—it’s easy to see how the cost of competitive polo can quickly escalate.

Even today, polo is not on the same plane as most major sports leagues, which is due chiefly, still, to the high bar to entry. Yet, the sport’s allure owes in no small part to that very exclusivity. Traditions remain central to the game—think ceremonial sabrages, champagne toasts and high fashion—which lend an air of sophistication that has drawn crowds hungry for an elevated experience.

In many respects, polo as a sport has shrugged off industry conventions. Rather than marketing to mass audiences, leagues have catered instead to smaller, discerning crowds. Experience is tantamount, which is evident in spectators’ own involvement in a match—like stomping the divots to return a field to a proper condition.

At the same time, the game is expanding its accessibility here in the States. Today, there are nearly 300 polo clubs in the U.S.—the most of any of the 90 countries around the world where the sport is played. Across the country, many clubs have launched programs that invite new players to experience the game without the hefty costs historically associated with the sport.

The result has been a steady growth in the sport. While it’s difficult to track national stats, many leagues report an uptick in participation and public engagement. At the International Polo Club in Palm Beach, Florida, for example, local box office revenue increased 185 percent between 2012 and 2015, including a 133 percent year-over-year gain in 2014, Forbes reports.

It may shock some, too, to know that women are polo’s fastest growing demographic. Female players made up a record 40 percent of membership in the U.S. Polo Association last year, and the number of women’s tournaments has steadily increased over the past five years.

In Sheridan, Wyoming, at the base of the Big Horn Mountains, polo is a staple of the community. Indeed, some of the country’s first matches were played here after English royalty, and with them thoroughbred horses, settled in the area in the late 1800s. Western horsemen began adopting the sport in the early 1900s, when they began selling horses to U.S. Calvary units, used the game as a training exercise.

“In those days, you could get $165 from the Government for a cavalry horse, which wasn’t bad, but you could get $300 for a polo pony,” explains Tommy Wayman, a Big Horn local who, in the 1980s, was the first U.S. player in 30 years to achieve 10-goal status, the game’s highest rank.

“Those cowboys would get an old mallet and they’d go out to the ranches, where they knew they could find horses that were broke to the saddle. Then they’d swing the mallet on them for a little bit, and the next day they’d be able to sell them as polo ponies.”

Today, on nearly any given summer afternoon, one can expect to find a friendly match at the Big Horn Polo Club. Down the road at the Flying H Polo Club, some of the world’s best players train and compete.

Led by U.S.P.A.-certified instructor Megan Flynn, the Big Horn Club now offers polo school to introduce enthusiasts, young and old, to the game. It also started a margarita league, which offers shorter games for novice players as a steppingstone to more competitive play.

“This is where everybody wants to come and play polo during the summer,” Katie Connell, president of the Big Horn Polo Club tells the Casper Star Tribune. “Our polo keeps going. It’s an unbelievable success.”

Seated in cattle country, Sheridan’s polo culture attracts many of the best players from around the world each year. The result is a unique and indelible combination of Western and English horsemanship, which puts a signature flare on the sport. It’s not unusual to see pick-up games played in roping saddles, or for Budweiser to be poured among spectators in place of customary champagne.

In many ways, Sheridan’s adoption of the game reflects its reception across the country. While keeping a foot in tradition, the sport is evolving to be more accessible to the public. It’s at once shedding pretenses that kept some at bay, while still preserving the refinement that contributes to its appeal.

“The best players in the United States are no longer the landed aristocracy,” Alex Webbe, a columnist for the Palm Beach Daily News told the New York Times in 1981. That evolution seems to now be coming full circle. No longer a sport only for society’s elite, polo has established its mass appeal, which will likely only continue to grow.