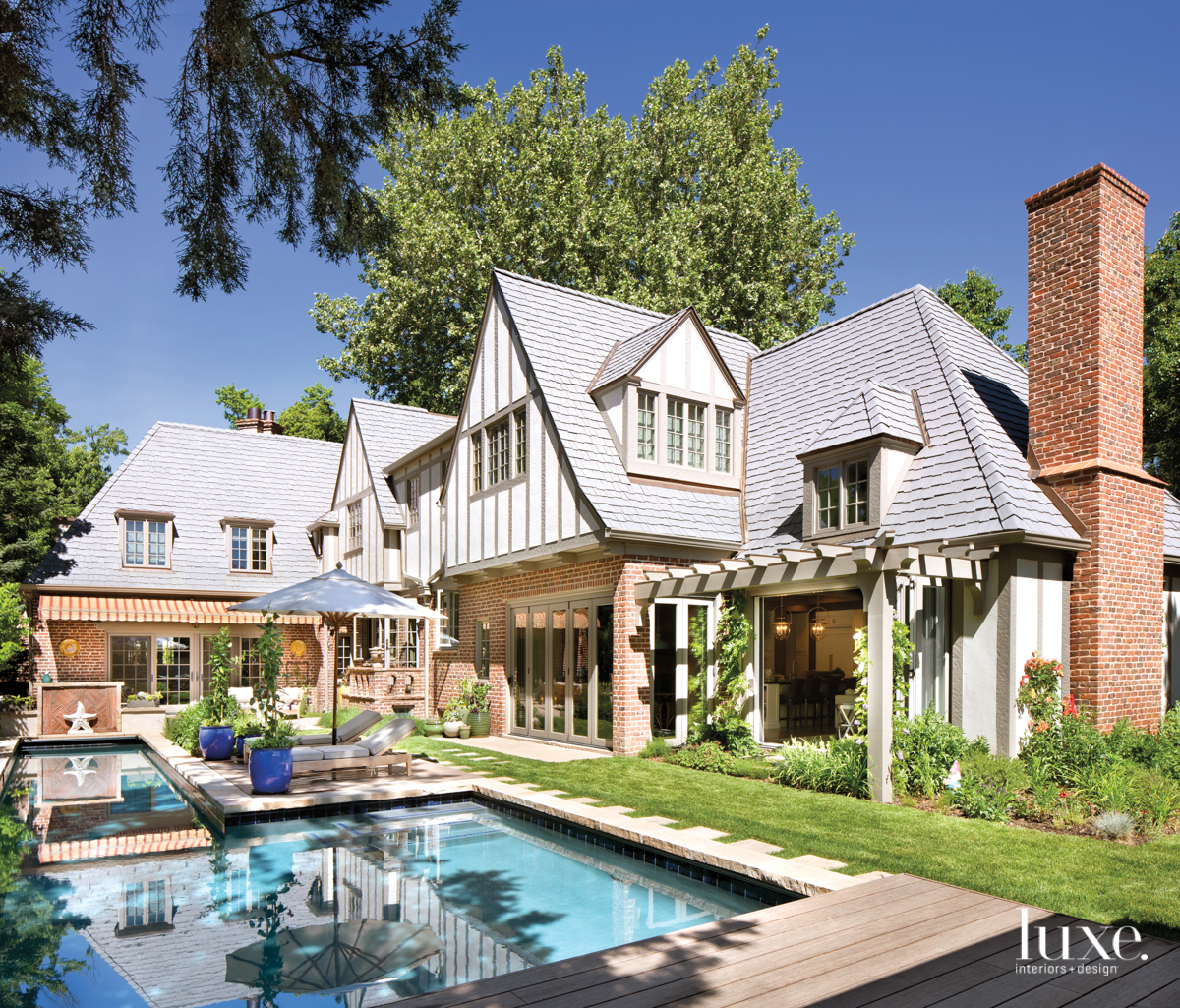 In 1928, architect Burnham Hoyt—a Denver native—designed a storybook brick Tudor in what is now a historic neighborhood in his hometown. One of five notable architects contributing to Denver’s City Beautiful movement of that era, Hoyt incorporated Jacobean, English Norman and French Provincial elements into the home’s design. Nearly a century later, a modern-day couple with three kids fell in love with the home’s history, style and location—but not its 1970s addition.

That expansion had left the home with some troublesome quirks the new occupants wanted to address. “The family room didn’t relate to the house and backyard, and there were many unnecessary little rooms,” says architect Steve Ekman, who worked with designer Peggy Robbins Bender and general contractor Doug Canady to restore and renovate the residence. “The new owners wanted to make this home their urban oasis.” They also wanted to preserve its historic details, which thrilled Ekman, a former trustee for Historic Denver. His team dug up the original architectural plans and photos at the Denver Public Library. “I have a historian on staff and he loves to do research,” Ekman says. “It’s sort of like archaeology for a house.”

General contractor Doug Canady restored the home’s exterior—and many interior elements—to its former glory. “There was so much work to be done—we cleaned the stone and the brick to bring out the old details,” says Ekman. “Doug did a great job of making the exterior sing.” Inside, the original living room, dining room and hallways were preserved but the additions at the rear of the house were removed to start fresh with more spacious, functional rooms.

Ekman’s team worked with Bender—one of their many collaborations—to create livable spaces that would accommodate contemporary furnishings. When styling the interiors, Bender let the home’s finishes lead the way. “The beautiful thing about a Tudor is the texture,” she says. “The palette is about rough-hewn timbers, stone and wood. There is a lot of warmth in the wood, and blue is a nice foil—so we pulled a lot of blues in with fabrics.”

Bender also incorporated playful patterns and splashes of color. In the entryway—where classic timbers, plaster and brickwork abound—she placed an elegant armchair upholstered with a head-turning fuchsia print. A few coats of soft gray paint freshened up the dark and dated wood-paneled dining room while at the same time helping to create a visual transition between the original part of the house and the new addition. “We found this great antique Jacobean-style sideboard that really adds detail to the room,” Bender says. In the living room, the timbers remain as they were, giving the room a cozy feel. With three kids and the family’s St. Bernard, Rufus, running around, the room offers an “away” space for the couple, with a drawing room feel. “It has the only original wood-burning fireplace,” Bender says.

The new great room is the family gathering spot. At one end, a Marvin accordion door folds back to link the space to the yard. Bender says the challenge with historic renovations is thoughtfully updating a home to make it functional. “A folding door—such a modern notion—seems like an unlikely fit for a Tudor great room, but it works,” she says. That door plus a host of new windows lend the formerly inward-facing home a strong connection to the outdoors. “The landscape is a huge part of this project,” Bender says. “You can’t have everything opening out without having something fabulous to open up to.”

Landscape designer Paul Wrona delivered by creating a lush, soothing garden. “We planted roses as the foreground for ornamental grasses,” he says. “We wanted wisteria to grow up the pergola and used a lot of grasses and a mix of perennial colors so there’s something blooming at all times.” Wrona also custom designed a swimming pool, as well as an outdoor dining area and a lounging spot. A 12-foot privacy wall was added to screen a new office building behind the property, and gently bubbling water features mask any traffic noise while also being lovely to look at.

The once labyrinthian home now suits the needs of the family while maintaining its old-world Tudor elegance. Ekman says: “The homeowner tells us that it functions so well, they are entertaining a lot more—they even had the husband’s company Christmas party here. It’s opened up their world.”