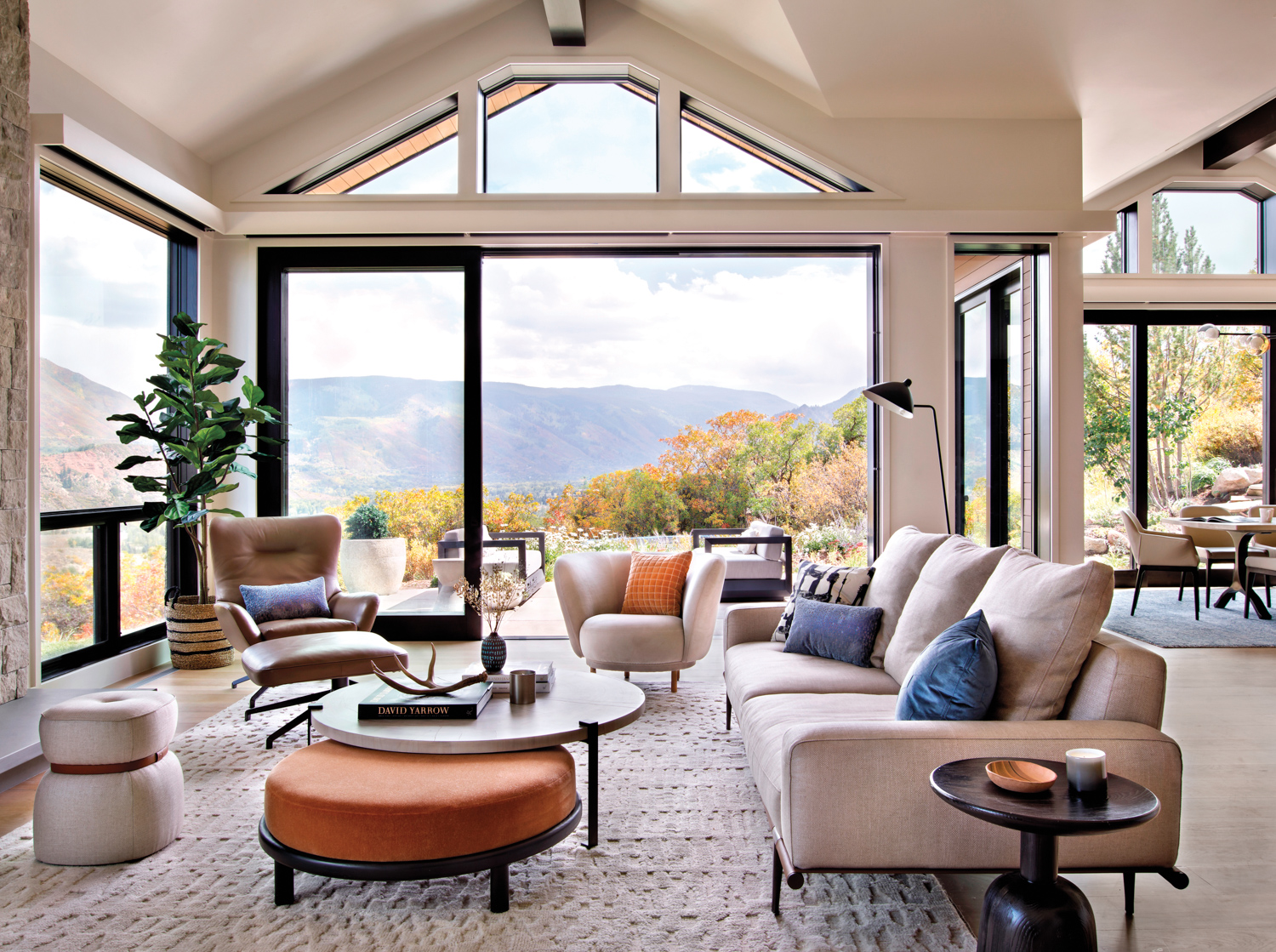 The post Behind The Cozy Makeover Of This Modern Mountain Aspen Home appeared first on Luxe Interiors + Design.

<![CDATA[ <p]]&gt;There’s something almost primordially comforting about living in the mountains. In the quiet seclusion of the surrounding landscape, time seems to slow down so one can truly savor moments of laughter and joy, swapping stories by the fire. This is what Craig and Mariah Morris craved most for their Aspen home. Though they love the contemporary structure—with its bright, voluminous rooms and expansive windows that perfectly capture views of the awe-inspiring mountainside—they also craved something more intimate and cozier. They turned to designers Joe McGuire and Matthew Tenzin to cultivate close-knit gathering spaces perfect for cocktail hours and family dinners.</p>

Originally built in 1977, the mountain abode was renovated in 2019 by the previous owner into its sleek statement of glass and sunlight, made in consultation with architect Scot Broughton. In their work, McGuire and Tenzin especially delight in making such grand contemporary structures feel welcoming and human-centric. “People seem to be drawn to us to create cozy interiors in these types of spaces,” notes McGuire. “We balance the architecture and complement it, so it doesn’t feel cold and stark.”

The home already provided an inspiring canvas for the designers to explore, and they found able partners in general contractors Thaddeus Eshelman and Jimmy Terui, who also oversaw the 2019 renovation. Collaborating on the new customizations with McGuire and Tenzin “was the bow on the present,” notes Terui. “All of their final touches really put it over the top.” Together, they focused on incorporating new finishes that would add more visual weight to the interior’s broad white walls and pale oak flooring. The abode featured black metal-framed windows and ceiling box beams that cut through the light and airy spaces, and the designers emphasized this juxtaposition by adding a few bolder finishes, such as staining the kitchen cabinetry in a deep ebony hue. The rich color “gives some structure and energy to the space, so it’s not just neutrals,” Tenzin explains.

To temper the angularity of the architecture, the designers introduced some curved elements to the interiors. “Right now, we have this desire for softer lines, yet still done in a very contemporary way,” says Tenzin. This was the guiding principle behind selecting the new furnishings and accents: all are unequivocally modern in silhouette, but never too sharp or sleek. Chairs and sofas have rounded backs and arms softened with tactile materials like shearling, wool and saddle leather. Mixing abstract designs with traditional Moroccan weaves, “the rugs are also really special, as they add a lot of comfort and interest,” says McGuire. The couple’s bedroom in particular is a study in tactile layering, with an upholstered bed frame, a fabric-paneled wall and artful Apparatus sconces featuring wefts of horsehair. “Textures were a key part of adding in that warmth to the home,” notes Tenzin about their overall approach.

The designers also kept everything within an organic palette borrowed from the surrounding mountain woodland to create cohesion. “Golden tones from the aspens, amber tones from the scrub oaks and greens from the evergreens all filter in through the house,” notes Tenzin. And in the couple’s serene main bedroom “there’s a little bit of a lavender hue that relates to the lavender and sage that grow so beautifully here in Colorado.” Artwork introduces more personal and playful notes of color, like the specially commissioned comic book-inspired piece by artist Nelson De La Nuez, which serves as a touching reference to the couple’s love story.

A self-confessed lighting fanatic, Tenzin was particularly passionate about how they would illuminate the home. Style wise, materials ranged from minimalist black metal to delicate amber glass globes. But “it was also really important for us to find LED fixtures that get warm as you dim them,” he explains. “It’s so critical for creating the right vibe.” These technical details are very much like “the difference between gray, cool lighting, which makes everybody look like a ghost, and that beautiful candlelit feel where everyone looks glamorous,” adds McGuire.

Nestled in this soft glow and laden with lush textures, the dwelling now feels more approachable. And for the designers, there’s nothing better than infusing soulfulness into such shiny, modern spaces. As McGuire says, “When you can walk in and see the family truly relaxing in their own home, that’s a feeling of success for us.”

The post Behind The Cozy Makeover Of This Modern Mountain Aspen Home appeared first on Luxe Interiors + Design.