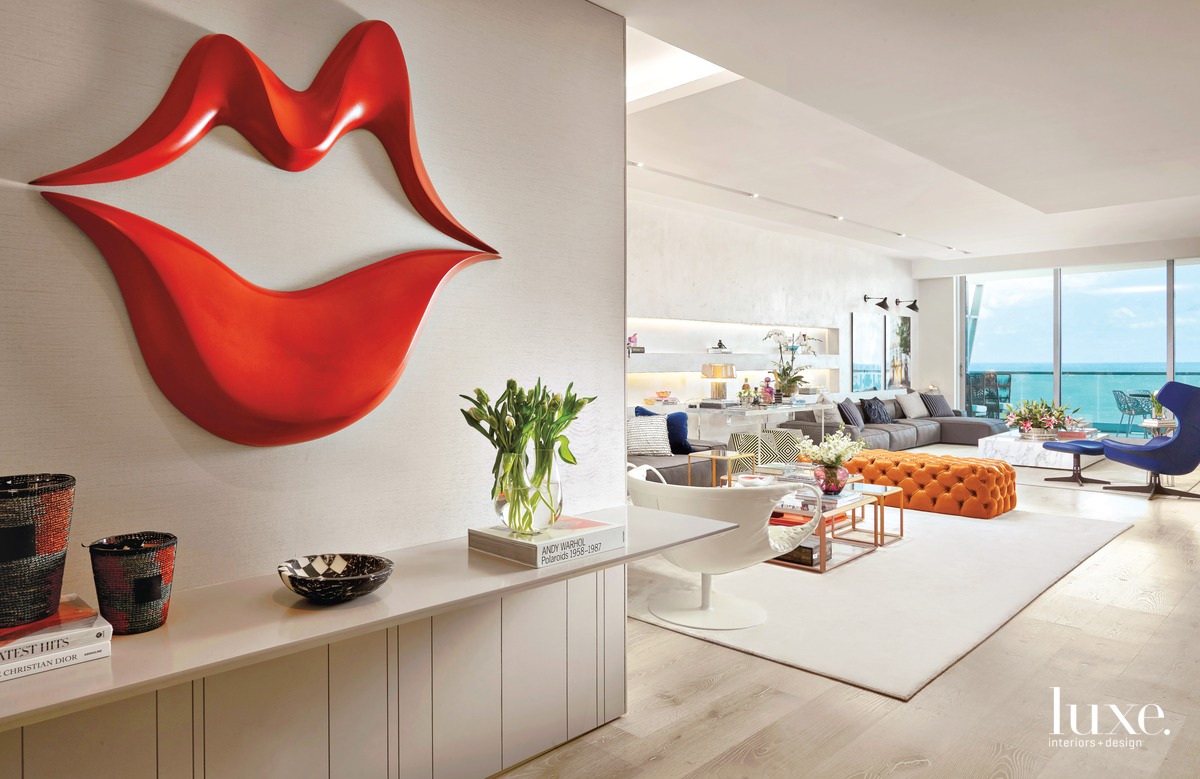 Luciana Fragali to transform their newly built getaway overlooking the ocean. “They wanted a modern, clean and neutral retreat that was cozy and welcoming,” says the interior designer. Working with CH Construction Group on the structural modifications, Fragali followed her clients’ cue by creating a luxurious space with customized millwork, thoughtful lighting and European design that encourages relaxation while taking advantage of the pristine views.

Taking on the project as a decorator-ready unit–raw from the developer with basic lighting, unfinished flooring in the main areas and primed walls–Fragali worked within the existing floor plan, later tying together modern and relaxed details seamlessly throughout. Centrally located, the kitchen anchors the apartment with a large living area and adjacent master bedroom, both with water vistas. On the opposite end lives a breakfast area and two other bedrooms–one for the homeowners’ two children and another for guests. Having the ability to work within a newly constructed unit allowed the interior designer the freedom to thoughtfully plan out each room and incorporate detail.

Each space was designed with the family’s needs and lifestyle in mind: “The homeowners told me instead of hosting dinners, they prefer to dine out,” explains Fragali regarding her decision to forgo a formal dining area. The living room was quite large, so dividing it into two spaces carved out a casual side for watching television near the windows and a more intimate sitting area near the kitchen. In the master bedroom, rather than placing the bed parallel with the window, as was recommended by the building’s plan, she opted to have it facing the incredible view. “We wanted them to be able to wake up, raise the blackout curtains and see the ocean,” says Fragali.

Throughout the condo, the ceiling was dropped and the lighting was arranged according to the planned furniture layouts. For the length of the living area, a modern concrete wall with niche LED-lit shelving was constructed that is both stylish and functional–it showcases books, objets d’art and a collection of Murano glass. Like the shelving’s hidden LED lighting, the door off of the living area that leads to the master bedroom was concealed by enveloping it in wallpaper and adding hidden retractable door handles to eliminate clunky hardware. “We didn’t like the idea of having the entrance to the master off the living area,” says Fragali. “So my solution was to make the space flow better visually–you don’t see unnecessary hinges anywhere.”

As a contrast to the apartment’s concrete walls in the main living area, the remaining surfaces are swathed in either textured wallcoverings or covered with wooden panels. For example, behind the master bed, carpenter Diego Fulia built and installed one of Fragali’s custom linear designs that adds depth and dimension to the bedroom’s muted tones. And underfoot, wide-plank flooring made out of engineered hardwood in a matte walnut-gray offers “great balance to the decoration,” says the designer. “It’s rustic and adds warmth.”

Staying within the homeowners’ request for a relatively subdued color palette, the interior designer knew she could have some fun with the furnishings. “My clients really know design,” says Fragali. “Their main residence is very modern, and they move often, so their taste evolves as designs change.” As a result, iconic European pieces punctuate the large living area. Along the concrete wall, two low-slung gray modular sofas ground each of the two spaces, with a custom caramel-colored tuftedleather ottoman resting between. A cluster of tables form a geometric composition near two white-leather Italian armchairs, and diagonally, a bold blue modern lounge chair overlooks the patio. This piece, says Fragali, informed the direction of the entire living room. “They wanted very modern and neutral. While gray is their preferred choice, I gave them two options, and they chose blue,” says the interior designer.

Arriving at the finished home now, a sense of calm settles in, and it’s clear that no detail has been overlooked. “One thing we pride ourselves on is that we really listen to our clients,” says Fragali. “When we design, we do it based on the client’s needs, specifications and budget, always.”