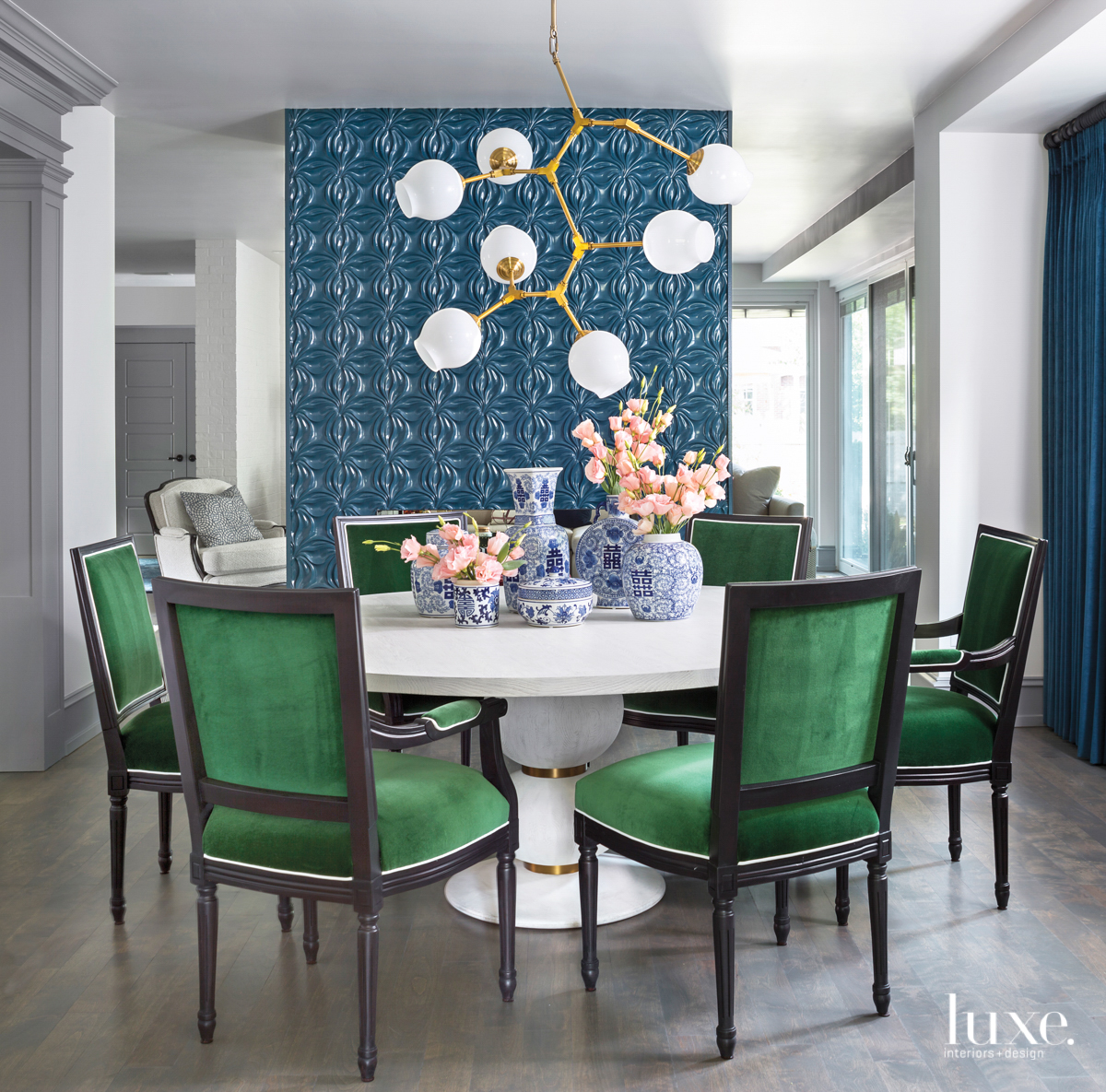 The post A Colorful Home Serves As A Study In Functionality appeared first on Luxe Interiors + Design.

Clearly, homeowner Jon Kinning is not afraid of color–and for the designer that was a welcome change. “So many clients these days are asking for white and bright,” Cullen says. “Jon’s love of dark blues, greens and even hot pink was really refreshing.” And while the finished project is undoubtedly a chromatic statement–complete with magenta tufted-velvet ottomans and flocked black wallcoverings–at its heart, the house is actually study in strict functionality.

“I approached Duet Design Group because the house wasn’t really fulfilling my needs at the time,” says Jon, who is a father of two teenagers. “We weren’t utilizing the spaces and the furniture layout wasn’t comfortable.” The fact that that a full redesign would offer the opportunity to abandon the dated furnishings and reimagine a dull color scheme was an added bonus. Jon had purchased and expanded the residence, but over the years had found that much of its nearly 6,000 square feet was going unused, specifically a sprawling open-plan basement that the family almost never ventured into.

Cullen, along with designer and co-principal Devon Tobin, made a handful of simple yet strategic changes to the home’s layout that made a dramatic impact. For instance, they removed a bulky wall and fireplace in order to gracefully connect the living room, dining room and kitchen. “The huge existing fireplace chopped up the spaces and wasn’t really true to the architecture of the 1905 house,” says Cullen. A new svelte partial wall features a modern fire box that’s open on both sides and is lined in three-dimensional tile lacquered in a deep blue. The piece acts as an accent wall for the dining room, where a chandelier of lissome gold branches hangs above a modern white dining table.

These same bold blue tones take center stage in the adjacent living room, where the walls are painted the same high-gloss hue. Rich velvet curtains were sourced to match the shade and trimmed with a pearly white wood tassel fringe by Samuel & Sons. A pair of floor lamps with chrome shades, a 1920s style sunburst mirror and a chandelier made up of delicate gold leaves brings additional elements of glamour. And while Cullen didn’t feel the need to stay true to a single era or style while selecting furnishings and accessories, she did want to honor the elegant turn-of-the century architecture in order to create a more cohesive look throughout. “The house was built more than 100 years ago, and she wanted us to recreate all the original trim,” says general contractor Rob Bacher, who had all of the molding custom milled.

Cullen’s big test was the rarely used basement. In other parts of the house she opened up the rooms, but on this level the designer felt the problem was too much undivided space. She made another partial wall, this one fitted with a bar, to create separate areas for a home theater and a game room. One side contains a vintage arcade and a custom poker table emblazoned with the green-and-white logo of Jon’s alma mater, Colorado State University. In the movie room, instead of unwieldy theater chairs, Cullen opted for a massive L-shaped sofa fronted by a collection of ottomans that can be arranged as desired for extra seating. The media system is custom fitted with recessed niches behind the projection screen for the speakers, creating a big screen worthy surround sound experience.

And while the new basement got rave reviews from Jon, it was praise from an even more discerning critic that ultimately deemed the space a blockbuster. Jon’s 16-year-old daughter has taken to throwing regular end-of-the-week movie parties there for her friends. Close to a dozen teens fill the space on any given Friday, drawn by a vintage-style popcorn machine and a fully stocked candy bar in addition to the theater and the arcade games. The house has become the place where all the kids like to gather, and Jon says it’s the home’s defining moment. “I challenged the designers, saying that for me success would involve actually using that basement,” says Jon. “And they crushed it.”

The post A Colorful Home Serves As A Study In Functionality appeared first on Luxe Interiors + Design.