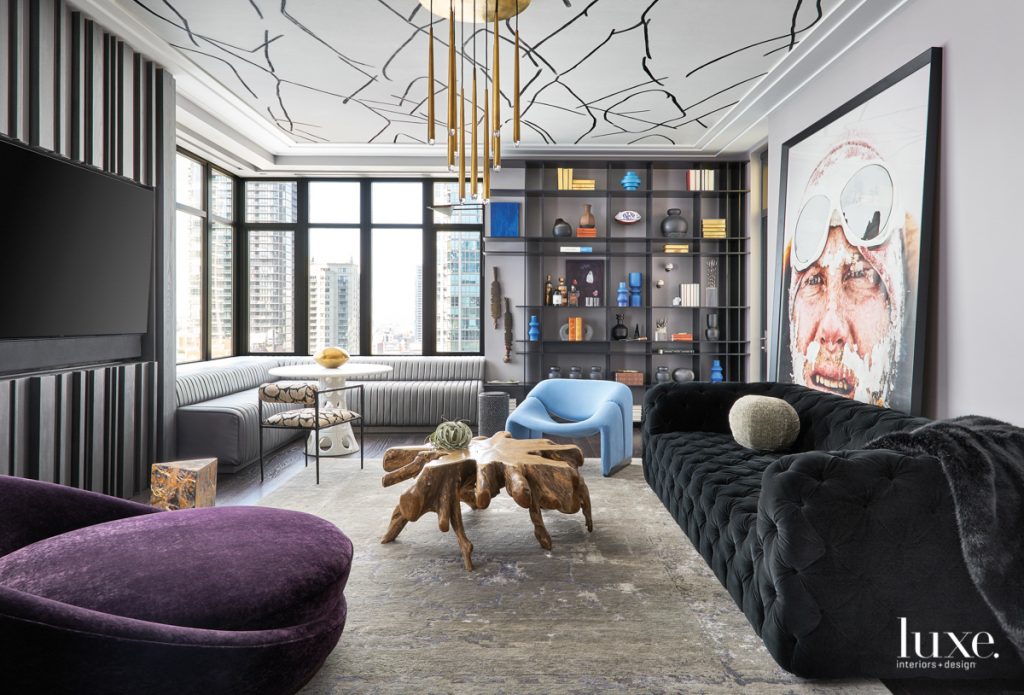 A few things immediately stood out to the designer. Observing him, she noticed he was always in motion, so it was important that furnishings were able to “not only withstand his energy but encourage it,” she says. Adds Alex, “I’m a big pacer and rough on things.” Svenstrup also knew she had to acknowledge and celebrate her client’s passions, particularly mountaineering. Addressing his need for what they both cheekily call “an adult jungle gym,” the designer chose sturdy furnishings. “There is nothing fragile here,” she says. “I didn’t want him to be afraid of his home.” Her selections include a gnarled teak root coffee table (that’s strong enough to stand on) in the living room, a solid Chesterfield sofa, a generous Milo Baughman satellite chaise, and a curvy Pierre Paulin lounge chair. All upholstered in contract-grade fabrics, the blue on the Paulin and the purple on the chaise pay homage to two of Alex’s other great loves: the Cubs and Northwestern University.

For a client who admits he “likes to chill in weird ways,” Svenstrup took advantage of the window seats around the perimeter of the unit, making them into stylish perches. “There’s no point in sitting by the window when you can actually be in the window,” she points out. One of these spots even forms the seating area of an intimate dining space. “Alex was never into the idea of a dining table,” says the designer, “so I approached the room as one large great room. I wanted to provide the option of a dining area, but I didn’t want it to feel like one.”

Svenstrup cleverly wove in references to Alex’s life as a mountaineer in subtle and surprising ways. One of the first suggestions is a collection of nine 3D-printed sculptures just inside the main living area. On closer inspection, they represent the seven summits and North and South Poles that comprise the Explorers Grand Slam, which Alex just completed in June. Dark millwork meant to evoke the striations of a mountain in vertical form clads the wall housing the TV, and the hand-painted wallpaper on the ceiling suggests jagged peaks. A self-portrait of climber Cory Richards, shot just after he survived an avalanche, is a more explicit nod. “Alex wanted a monumental portrait that would encourage people to ask questions,” Svenstrup explains.

Alex’s demanding, risky pursuit informed Svenstrup’s approach to the bedroom. That’s where she hung certificates marking his accomplishments, so it’s a place for reflection–and a spot for him to recharge upon his return to sea level. “When I’m not on mountains, it’s hard to be home,” says Alex. “When I come back, it’s nice to go to a sanctuary where I can relax, but not be separate from the places I’ve been and the things I’ve done.” There, the designer hewed to a palette of grays infused with lush texture but eschewed the bold notes of color she used elsewhere. Instead, from the pewter-hued Venetian plaster on the walls to the perforated metallic draperies that allow in light but maintain privacy and the ruched charcoal fabric on the bed, the effect is soothing and cocoon-like.

Creating a home for an adventurer was an adventure in itself for Svenstrup. “I would dare to say it was the biggest one of my career,” she says. “He has been on a journey, and so have I.” And the final result isn’t just a home perfectly suited to Alex. The project allowed her to grow as a designer and businessperson. “I had his complete trust, and he embraced the design process, allowing me to curate his home,” she says. “I use him with other clients as an example of how I work and what happens when you’re on the same page.”