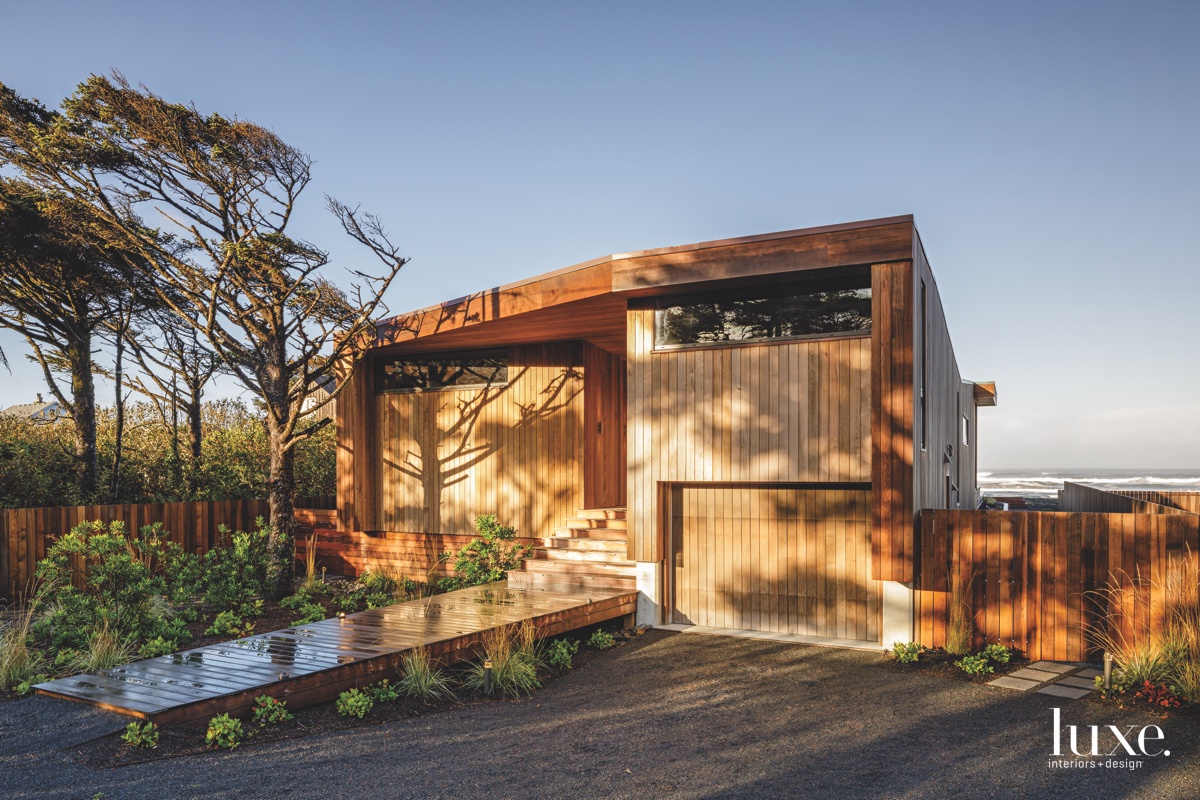 The post An Oregon Beach House Is All About Clean Lines appeared first on Luxe Interiors + Design.

<![CDATA[ <p]]&gt;The modernist house that residential designer David Horning and interior designer Holly Freres devised for Portlanders Michael and Kari Lubitz is perched practically on the edge of the Pacific Ocean. “The architecture is secondary to the setting,” Horning says. “The house frames and captures the water and the mountains.”</p>

Horning created the house’s form as a simple rectangle. An origami-like roofline ascends and descends, simulating the outline of the nearby Northern Oregon Coast Range. “The exterior siding is vertical western red cedar,” he says. “It will eventually turn gray and just kind of go away as it blends with the gray of the sky and the ocean.”

In the living room, a low-profile sofa upholstered with caramel-colored Italian leather, a marble-and-bronze coffee table, and a large-scale painting with bright blue and green tones add texture and color to the open-concept interiors. In one of the guest rooms, a custom rift white oak bed and built-in daybed display bolsters and pillows covered in emerald green cashmere velvet. The master suite featuring a luxurious tub placed only a few feet from the bed.

The sea-facing rear of the Lubitzes’ residence features mostly glass while the rest of the structure is practically opaque. “We call this the shelter house,” Horning says. “It’s a refuge for our clients. We wanted them to feel protected when they’re inside, but to still be part of the ocean landscape.”

Editor’s Note: This article has been updated to reference David Horning as a residential designer, not an architect.

The post An Oregon Beach House Is All About Clean Lines appeared first on Luxe Interiors + Design. 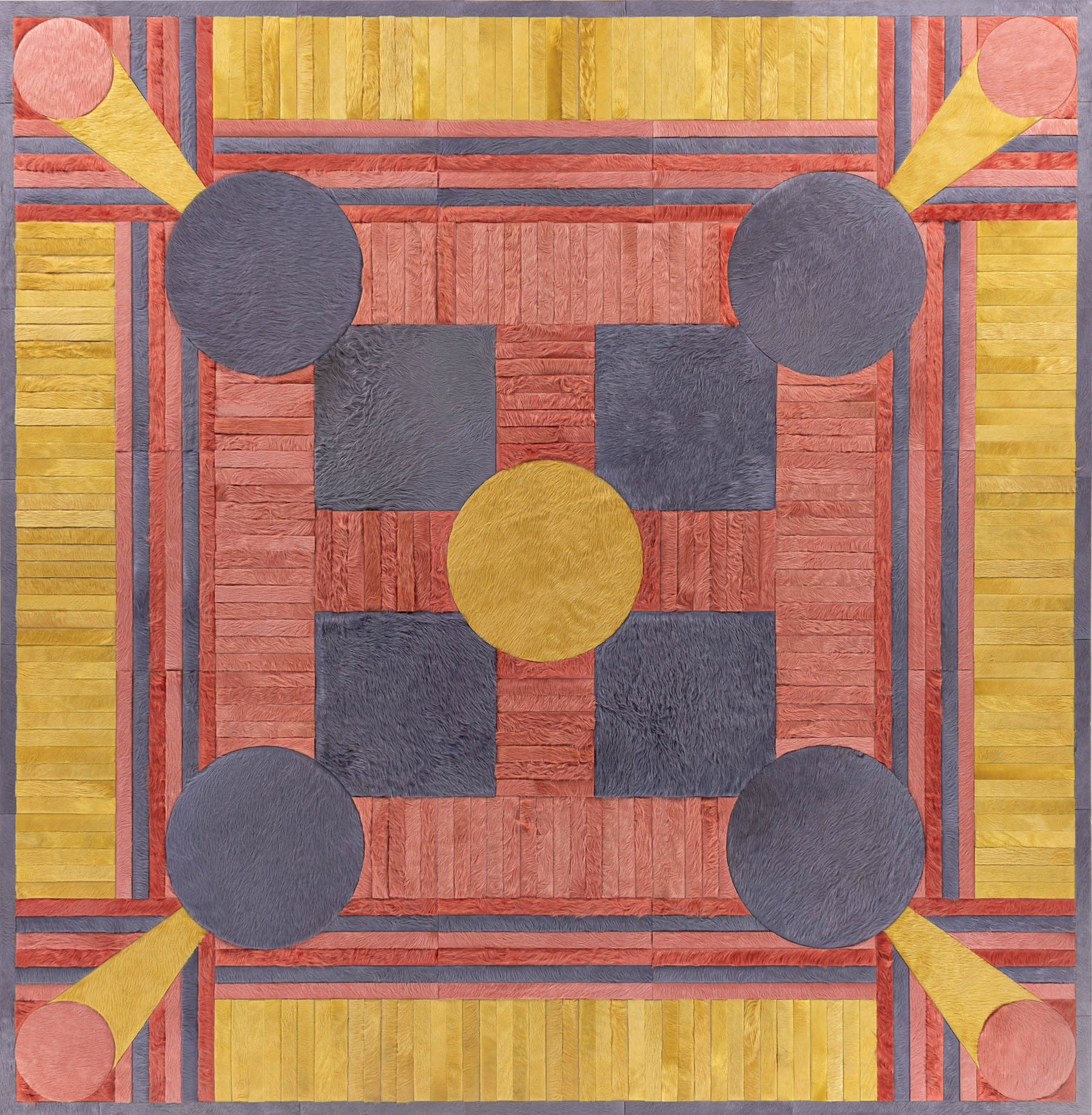 From luxury hide-rug designer extraordinaire Kyle Bunting comes a new collection, Atlas, brought to life in collaboration with renowned photographer Douglas Friedman. “I wanted to work with Douglas because I respect him as a creative force,” says Bunting, “and I also wanted a different perspective than I’d had before.” The collection draws inspiration from Friedman’s ranch retreat in Marfa, Texas, reflecting both the colors and the emotional weight of the dynamic and provocative environment, and it’s unique in that it features one universal geometric design that can be translated to any shape and embrace a multitude of color combinations. The rugs can be manipulated and customized in an infinite number of ways—and as always, everything is created locally in Austin with quick lead times. kylebunting.com 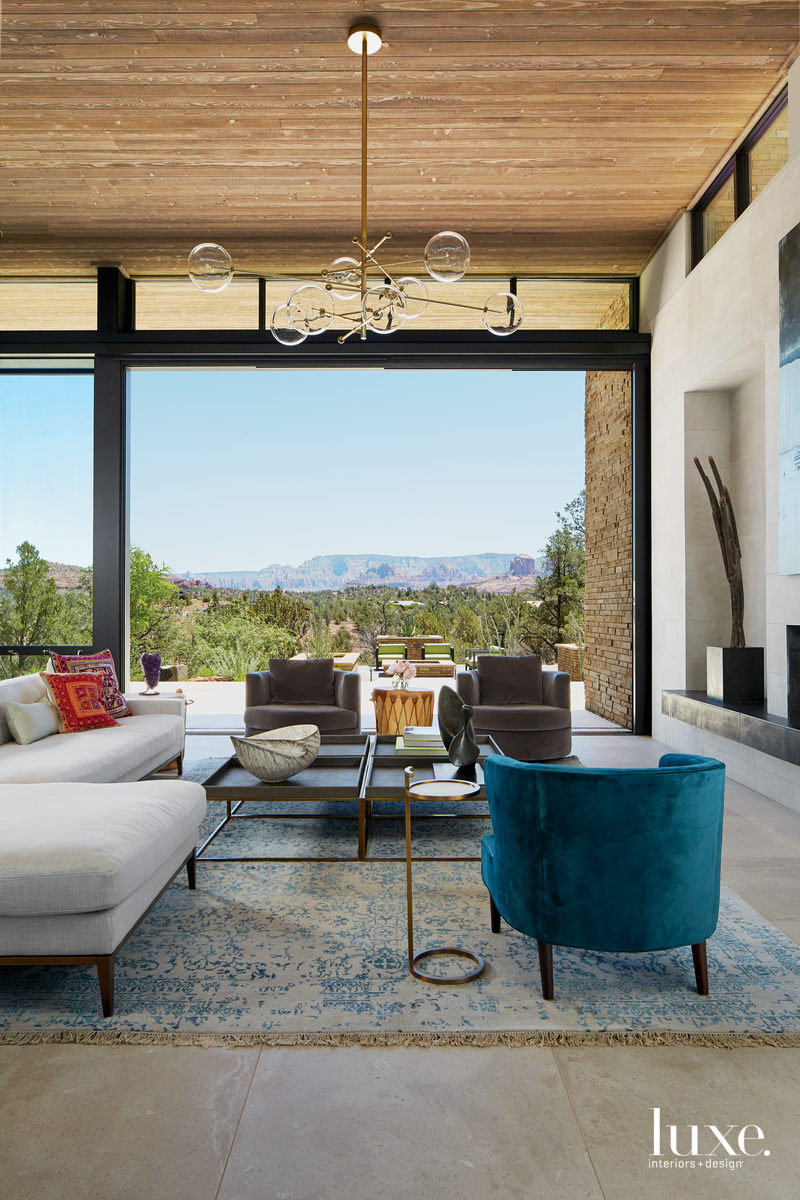 <![CDATA[ <p]]&gt;Nancy S. Weinman left her native Manhattan for the Southwest as a college student. Yet even though the architect and designer fell in love with the region instantly and knew it would become her home, she looks back on her place of birth frequently–and to great effect. In the five years she’s been practicing in Arizona, Weinman–who has offices in Sedona and New York City– become known for a contemporary style that respects her adopted region’s aesthetic while borrowing ideas, materials and inspiration that initially might seem more at home among actual skyscrapers than skyscraping red rocks.</p>

For the Sedona residence she shares with her husband, Richard S. Witlin, built on a 4-acre lot facing the iconic Cathedral Rock, Weinman eschewed the adobe-and-viga territorial style that predominates in the area, opting instead for a clean, open, light-flooded structure that quite literally reflects the surrounding environment. The lacquered-white cabinetry in the kitchen, for instance, is inspired by contemporary Italian design, she says, and certainly “isn’t the norm in Arizona.” Nevertheless its glossy surfaces act as a mirror for the scenery through the windows, “picking up the juniper trees that surround the home,” she explains. Likewise, some people buy throw pillows to complement the fabric of a nearby chair or rug; Weinman selected the clay-colored velvet for the pillows adorning her bed based on the way “their sheen mimics the color changes in the landscape,” she says.

Although they were only half-seriously thinking about moving when a real estate agent showed them the site three years ago, Weinman and Witlin were so transfixed by the location and views that they made an offer almost instantly. The architectural brief was a classic example of something that’s simple without being easy.

Weinman envisioned a linear plan: a rectangular box with an eastern facade done almost entirely in glass, “because that eastern view”–of Cathedral Rock and its impressive sandstone cohort–“is so enormous, you want to capture as much of it as you can,” she says. Over time, she would deconstruct that original rectangular box little by little, adding alcoves here and carving out private spaces there until a home had emerged.

To maximize the stellar views, which take in the desert grounds by landscape architect Pete Cure, Weinman worked with builder Bill Brann to arrange the house around a massive central volume, a 50-foot-long great room–comprising the living area, kitchen and dining area–whose full length of glass dazzlingly frames the Red Rock tableau to the east. Two-thirds of the glass can be slid into a center pocket wall, erasing any physical barrier separating the living and dining areas from the outdoors. “We don’t even have seating on the patio,” Weinman notes, “because you can just sit in the living area with the glass all the way open.”

Surfaces in this great room were chosen for not only their material elegance but also their ability to reflect light. “The couch is off-white, the wall tile has a kind of white limestone feel, and the floors are sort of a grayish porcelain–it looks like concrete but much more re ned,” Weinman says. In the entryway, facets of a wall-mounted black ceramic tile scatter reflected light kaleidoscopically. The feature provides an early clue “that this whole place is about reflectivity: It’s a reflection of what’s outside,” Weinman says. It’s also, she admits, “a little Manhattan-ish. Not a hundred percent. But I wanted to bring that in, because that is who I am.”

By playing three roles at once–architect, designer and client–Weinman was able to see the house in its harmonious totality at all points along the way. “It meant the ideas came together earlier than normal in the process,” she says. With so much information swirling in her head and accessible in her notes, every action and purchase was subtly informed by every other action and purchase. “For instance, a partition behind the headboard in the master bedroom was adjusted, prior to drywall, to match perfectly,” she says. “And the replace boxes were designed on-site to match the exact dimensions of artwork that was in storage during the build-out.” During a shopping trip in India, she knew a particular rug would go perfectly in a room before the space had even been constructed, because “I had the floor plan drawing and dimensions with me at all times,” she says.

Weinman’s incorporation of unexpected elements into the home has piqued interest, thanks to her astute vision. “If I pick something o the shelf in New York and bring it to Sedona,” she says, “people are like: ‘Wow, that’s so fresh and contemporary!’ Quartz countertops, Italian cabinets and large-format tiles from Spain–some people here may have never seen it, but they like it, and they want it. You just have to make sure you’re doing it in a way that works with everything else–including the view out your window.